Symphonic band plays a world tour of song and dance

BYU’s Symphonic Band will present “A Song or Dance,” a lively concert filled with exuberant dances and lyrical songs from around the world, on Nov. 7.

Kirt Saville, the director of the BYU School of Music and the Symphonic Band, discussed how he decided the theme of the concert. He began by grouping pieces he was interested in doing and observing what they had in common.

“I realized I was selecting a lot of dance pieces and some really beautiful songs,” Saville said. “There is a saying that ‘all music is either a song or a dance,’ so that became the theme for the concert.”

The evening will begin with “Slava!” by Leonard Bernstein. The piece has a vaudeville flair with odd meters and two different themes which are combined in a thrilling climax.

Other dance-inspired tunes will include “San Antonio Dances” by Frank Ticheli, “Four Scottish Dances” by Malcolm Arnold, “I’m Seventeen Come Sunday” by Percy Grainger and “Funiculi-Funicula Rhapsody” by Luigi Denza. All of these dances are inspired by a different locality - Texas, Scotland, England and Italy, respectively.

“I think audiences are going to enjoy that these dances relate to different areas,” Saville said. “They are musical images of places and settings. They transport you to a different place. And Bernstein is as American as you can get. Another tag I could have put on the concert was a world tour.”

The first of the two “song” selections of the evening will be “The Lark in the Clear Air” by Clifton Taylor. Based on a traditional Irish folk tune, the piece includes an imitation of a lark song and features the solo flute. The second will be “Drifting from Midnight” by Ethan Wickman, a BYU alumnus.

“Maybe all music can’t fit neatly into those two categories,” Saville said, “but this concert features wonderful dance music and beautiful songs. The music is very audience-friendly but very demanding of the musicians. The choice of literature is important. If I can find something that both the students and I love and that can be accessible to the audience, it can be a joyful experience for everybody.” 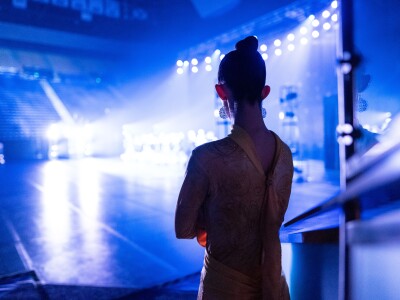