Dallyn Vail Bayles makes directing debut with ‘Into the Woods’

Tickets: Available in person at the BYU Ticket Office in the Harris Fine Arts Center or Marriott Center, by phone at 801-422-2981 or at byuarts.com

Professional actor, singer and recording artist Dallyn Vail Bayles is making his directing debut in the BYU Music Dance Theatre (MDT) production of “Into the Woods.” Opening on Nov. 17 with “once upon a time…’, the musical will run for three weeks and show what truly happens after “happily ever after.”

Bayles graduated from BYU in 2004 with a BFA in MDT. 13 years later he has returned, but this time around he is not on the stage, but taking a shot at directing.

“I've experienced a little of the pre-production process as an assistant director, but working on a show from the ground up, developing a concept for the show, and then helping to bring everybody along was a whole new process for me. It was a steep learning curve, but I was able to rely a lot on my experience as a professional actor, knowing a little of what it takes to put on a show. This was just a different seat in the theater, and I had to consider the show as a whole.”

Since leaving BYU, most of Bayles’ career has been in musical theatre. His talent led him to perform with the Broadway national touring companies of “The Phantom of the Opera” and “Les Misérables.” Between starring in films such as “Joseph Smith: Prophet of the Restoration” and performing on stage in such shows as “The Weaver of Raveloe” and several other regional theatre productions, Bayles has also weaved his time with education.

He recently received his MFA in musical theatre from Boston Conservatory and moved back to Utah with his family. He began teaching voice at BYU as an adjunct professor. While shadowing Theatre and Media Arts Professor Tim Threlfall in a musical scene study class, Threlfall approached Bayles and asked him to direct “Into the Woods.”

“I was very surprised,” said Bayles “Pleasantly surprised and grateful. I’ve been anxious to do more directing. I have done assistant directing but this is my first opportunity to take the helm of a show. I’ve had a lot of fun looking at the show from a director’s point of view wondering ‘How do we tell the story as a whole? What does this story say and what message do we want to convey to our audience?’ It’s been a thrilling process interacting and working with such an amazing production team and group of actors, coming up with ideas on how we can best present this story and the message it contains.”

Before winning a Tony Award and becoming a Hollywood blockbuster, “Into the Woods” was a 1986 collaboration of music and lyrics created by Stephen Sondheim and book written by James Lapine.

“These are all stories that we know,” said Bayles. “But what they’ve done is create this musical fantasia, as well as a new fairy tale with the Baker and his wife, where all of these stories and their characters intermingle and relate to each other, forced to interact with one another as they pursue their objectives. That was the inspiration for the show. It's a unique look at fairy tales and what they teach us. My personal focus for this production is what it teaches us about families.”

Bayles shared that every character in the story is very influenced by and influences their family members. In Act 2, the audience comes to see how family comes into play with the choices one makes.

“Sondheim and Lapine wanted to show us there are consequences to our actions that not only affect our own lives but the community as a whole. I began to see how this musical particularly focuses on how this is true within our family relationships, and how sometimes parents and even spouses don’t always remember you have to be careful of what you say, do and wish for because people, especially our children and spouses, are listening and watching. There are always consequences attached to what you do, say, and wish for.”

Because that is most keenly felt in the family, Bayles shared that audiences will find some unmistakable warnings about the consequences resulting from abandonment, neglect, cruelty, infidelity, and an overbearing and overprotective parent in “Into the Woods.”

At the tail end of those lessons also lies the message of hope. The fantastic fairy tale teaches the morals of making wrong choices in life, but also utilizes redemption and the ability to change in order to pursue a new happily ever after.

“It’s about always remembering that there is hope no matter where you’re at in your journey through the woods. Like some of the characters in the musical, you can change your course and face the consequences of your previous choices. There’s always hope of repentance, there's always hope of change. You may be sadder and wiser, but there’s still that hope.”

Bayles shared that the lessons learned in “Into the Woods” are as deep and serious as they are humorous, and that even though they are presented in the musical at a very fast pace and in a fantastical and melodramatic way, there is something that we can all learn that will make us better people, spouses, parents and children.

Dallyn Vail Bayles makes directing debut with ‘Into the Woods’ 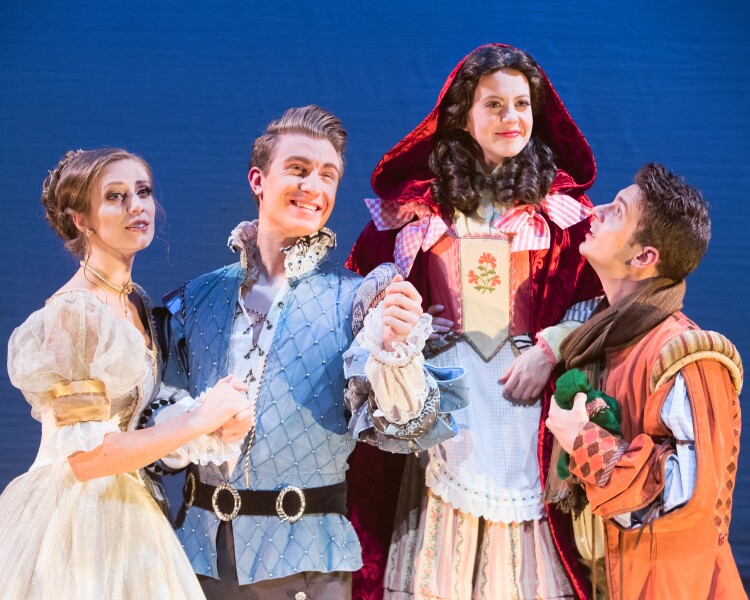