Faster than a speeding Corvette, more environmental than a locomotive and turning heads with a single run. Look! It’s BYU’s new electric racecar.

After nearly six years of designing and building, BYU students watched their lightweight, electric car achieve a top speed of 139 mph this month at the Bonneville Salt Flats.

In land speed racing jargon, the car is called a streamliner, meaning it has a long, slender shape and enclosed wheels to reduce air resistance. The shape, along with its lightweight carbon fiber body and 880 lithium ion batteries, helped the car reach its high speeds.

“Very few people get the chance to work with carbon fiber projects, especially something this big,” said Kristin Heuer, a senior manufacturing engineering technology student who began her work on the car as part of a capstone course. “It’s not something you can do with just a couple people, so it taught me a lot about problem solving and working efficiently as a team. I feel tremendously lucky.”

Heuer is one of more than 100 students, many from outside the college of engineering and technology and most unpaid volunteers, who designed and built the car with Perry Carter as the six-year lead on the project.

“This car represents thousands of hours of student time, literally thousands,” Carter said. “There’s a lot of educational value there.”

Jeffrey Baxter helped design the car as a mechanical engineering undergrad, but decided to continue helping as he pursued an MBA at BYU’s Marriott School.

“It was my senior project to design the car, so it’s great to help make it a reality,” Baxter said. “It’s really about the leadership opportunities: working with the people, working with Dr. Carter, getting a team together and getting everything in line.”

BYU’s vehicle is on a quest to set a speed record for the E-1 class, which mandates finished vehicles weigh less than 1,100 pounds.

It’s a difficult requirement to meet, but BYU used a series of innovations to lighten the load and help the car soar. For example:

With one inch of ground clearance and a turning radius of 600 feet, compared to an average car’s turning radius of 35 feet, the car can run safely only in places like the Bonneville Salt Flats near Wendover, Utah.
But even if the car can’t be used for weekend getaways through the canyon, Carter is pleased with his students’ heroic work and the opportunities now available to them.

“Many of our students have had good interviews and job placements because of their practical experience here,” he said. “I think employers like to see that a student has gone out of his way to do something extracurricular rather than just sit through class and do all of the assignments.”

Students who worked on the project have gone on to jobs and internships at Nascar engineering, StyleMark sunglasses and Optimal Solutions Company partly because of their work on the construction, design and computer analysis of the car, respectively.

Cars attempting to set world records have two miles to accelerate, one mile to test and record speeds and another two miles to decelerate. The car recorded the 139 mph speed on one day, which was faster than unofficial standards in the 130s. But to qualify as an official world record, a car must achieve the speed on two consecutive days. On the second day, the car was traveling at 180 mph when it hit a rut and didn’t complete its run, sustaining too much damage to return to the Salt Flats this year.

“We’re disappointed but not discouraged,” says Carter. “When we return next year we have a goal of 200 mph. We have just opened the door to a lot more engineering education being derived from this project.” 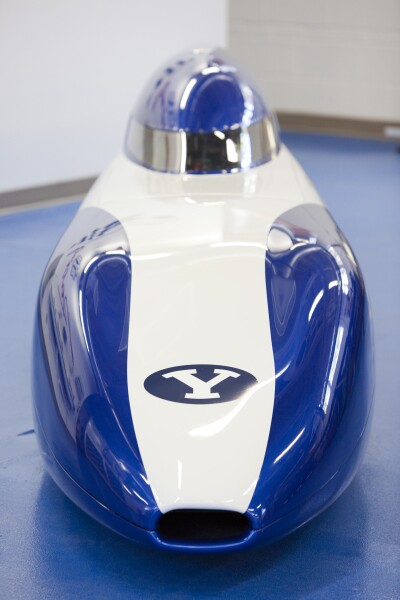 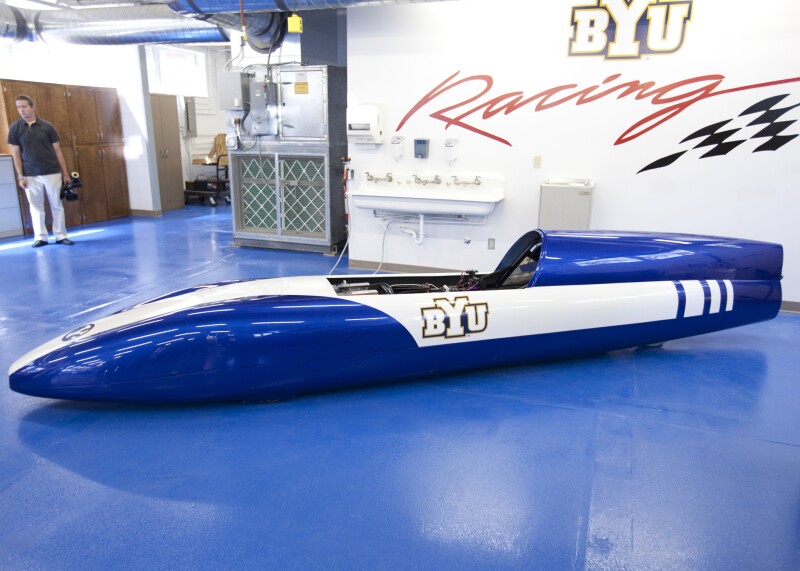 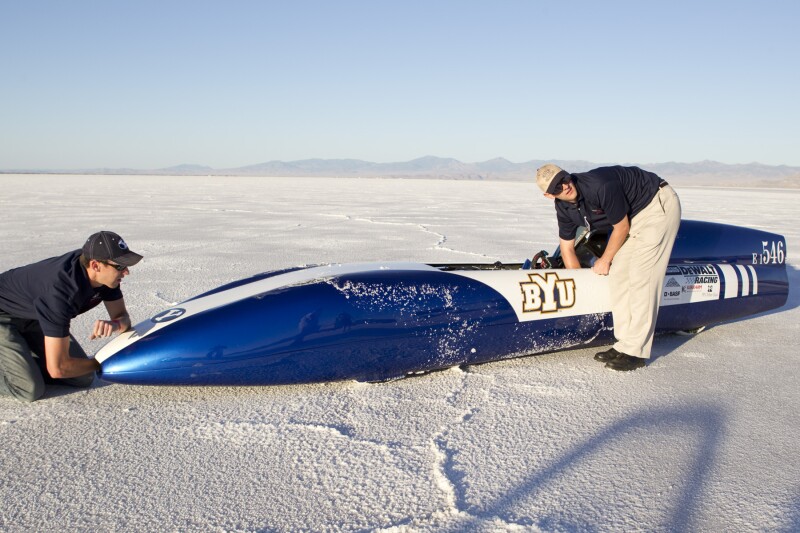 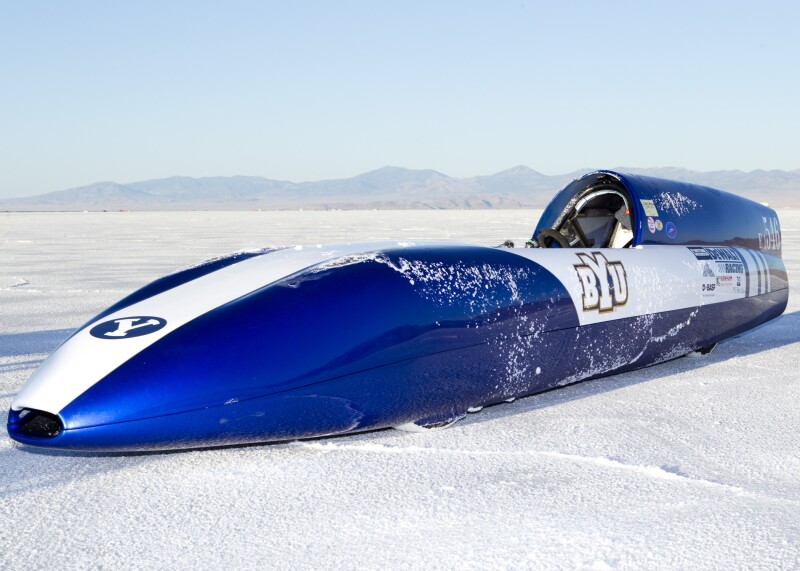 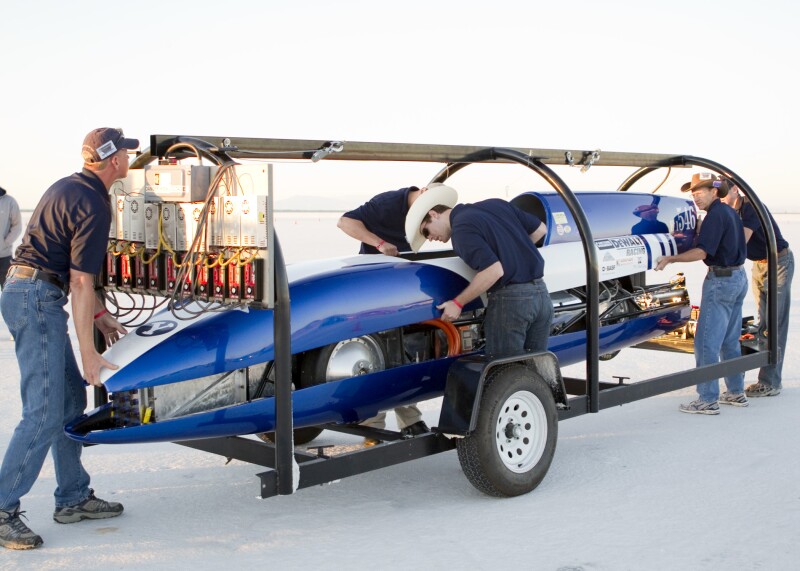 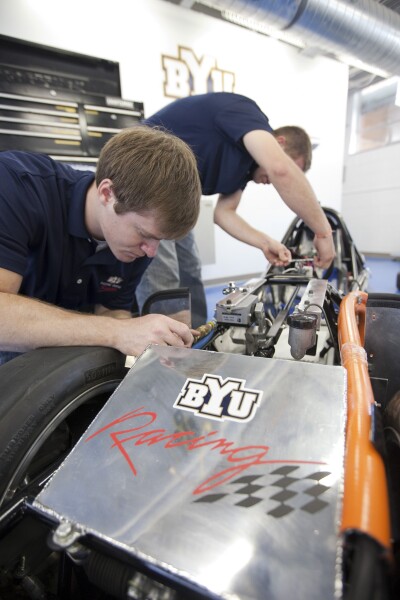 6 of 6
1008-25 230.jpg
Jaren S. Wilkey/BYU Photo
1 of 6
Download this Gallery By clicking this link you agree to our Terms & Conditions
Related Articles
data-content-type="article"