The BYU Philharmonic Orchestra will perform a showcase of orchestral masterpieces at their concert on Nov. 15. The orchestra is one of BYU’s premier performing groups and consists almost entirely of music majors, both undergraduate and graduate students. It is conducted by Kory Katseanes, director of orchestras in the BYU School of Music.

The highlight of the evening will be “Scheherazade,” by Nicolai Rimski-Korsakoff. The symphonic suite is one of the most famous and popular classical works of all time. It is based on the classic folk tales, “One Thousand and One Nights,” also known as the “Arabian Nights.”

“‘Scheherazade’ has some famous lines that are known worldwide,” said Catherine Boyack, a flutist in the orchestra. “The violin theme, which represents the princess Scheherazade telling her tale, opens every movement in a beautiful, exotic, mesmerizing line. The piece is fantastic and famous for all of the right reasons. It has the nuance, it has the drama, it has the poetry.”

Following the source material, the suite tells the tale of a princess who outwits an angry king by telling tales about Sinbad the Sailor and others over the course of a thousand days to avoid execution.

“The opportunity to experience Scheherazade is something everyone should take advantage of, whenever it comes around,” Katseanes said.

The song cycle, “Les Nuits d’été, Op. 7,” by Hector Berlioz will open the concert. The song cycle will feature vocals by Diane Reich, professor of vocal performance at BYU.

“The Berlioz piece is less known than the other works on the program,” Boyack said. “But this work for vocalist and orchestra is gorgeous. We are so lucky to have the amazing Diane Reich singing with us.”

Boyack is particularly excited to be playing the second piece of the evening, “Daphnis et Chloé, Suite No. 2” by Maurice Ravel, as it features a magnificent solo for flute.

“The suite is taken from the end of the ballet “Daphnis et Chloé,” Boyack said. “It really encompasses the beauty and color of French music. I feel lucky to be playing one of the biggest, most important flute solos in the orchestral repertoire. The work is grand, lush and exciting.”

“It will be a night of ravishing beauty and drama,” Katseanes said. “Don’t miss it.” 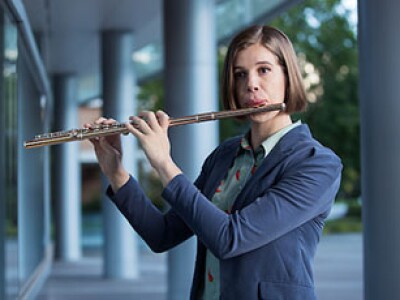