“At War! The Changing Face of American War Illustration” opens at MOA Feb. 4

American opinion was a key front in the wars of the 20th century, and illustrations were vital weapons in the fight for the hearts and minds of American citizens. Paintings, posters, cartoons and other visual media supporting or criticizing each war have captured the civic imagination and helped define what it is to be an American.

“At War! The Changing Face of American War Illustration,” a new exhibition at the BYU Museum of Art, will consist of nearly 70 works of art, including posters, paintings, comic strips, editorial cartoons, animation and video. The exhibition will examine the similarities and differences of both the medium and message of American war imagery from 1913 to 2003. It will also explore three themes that have remained constant in wartime illustrations throughout the 20th century: Fear, duty and nostalgia.

“At War! The Changing Face of American War Illustration” will be on view in the Conway A. Ashton & Carl E. Jackman Gallery on the lower level of the museum from Friday, Feb. 4, through Wednesday, Aug. 3. Admission is free. Free docent-led tours can be scheduled with at least one week’s notice by calling the Museum Education Department at (801) 422-1140. More information will be available on the Museum of Art Web site, moa.byu.edu.

The Museum of Art will host an exhibition preview on Thursday, Feb. 3, from 7 to 9 p.m. Entertainment will be provided by The Jazz Docs and light refreshments will be served.

Many of the works in “At War!” are drawn from the Museum of Art’s extensive collection of WWI and WWII posters. Other works are on loan from the collections of the Army, the Navy, the Norman Rockwell Museum and the Northern Texas University Library. The exhibition will feature works by well-known artists Howard Chandler Christy, James Montgomery Flag, Theodor Seuss Geisel, Charles Dana Gibson, Norman Rockwell and N.C. Wyeth, as well as works by a variety of contemporary American illustrators.

This exhibition is the result of an interdisciplinary collaboration. Marian Wardle, the Museum of Art’s curator of American art, developed the exhibition in cooperation with Kristin Matthews, an assistant professor of English at BYU who teaches classes about literary war imagery, and Bethanne Anderson, an associate professor of visual art at BYU and a successful book illustrator.

“Despite the thematic constancy in America’s war imagery, the object and subject of the themes change dramatically over the century,” Matthews said. “Many of these changes are purely contextual—different wars with different technologies, enemies, and justifications prompt different governmental and public responses. However, these changes also signal an evolving American public identity that is more fractious, more skeptical, and more vocal—ultimately, a public that is not easily united into a single body or under a singular narrative.”

The Museum of Art’s collection of war posters came to the university from former BYU history professor Philip M. Flammer. Flammer served in the U.S. Air Force as a lieutenant colonel in the Vietnam and Korean wars. He earned a doctorate in history from Yale University and shared his passion for military history in his teaching at the Air Force Academy in Colorado Springs, Colorado, and at BYU.

Flammer avidly collected war images, searching antique stores and garage sales. His efforts resulted in a collection of nearly 100 posters. Some of the posters in the Flammer collection are rare and are not represented in the collections of major national museums and libraries.

In conjunction with the exhibition, the museum will host an interdisciplinary symposium Friday and Saturday, Feb. 25-26, titled “Illustrating War: The Aesthetics and Ethics of Representation.”

The keynote speaker at the symposium is Jim Aulich the Research Degree Coordinator and Visual Culture Research Centre Leader in the Manchester Institute for Research and Innovation in Art and Design (MIRIAD) at Manchester Metropolitan University in England.

Aulich has published widely on the relationships between history, memory and representation, especially in the fields of propaganda and publicity in the graphic arts. From 2003 through 2006 he oversaw the digitization of the poster collection at the Imperial War Museum in London, and in 2008 was the curator of the exhibition and eponymous book “War Posters Weapons of Mass Communication.”

Wardle, Matthews and Andersen hope the symposium will elicit a multi-faceted discussion about the exhibition and the questions it asks viewers. Information about attending the symposium is available at moa.byu.edu.

“At War! The Changing Face of American War Illustration” opens at MOA Feb. 4 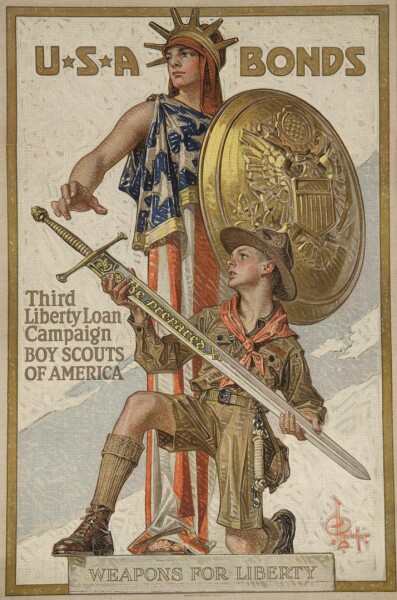 1 of 6
USABonds.jpg
BYU Museum of Art 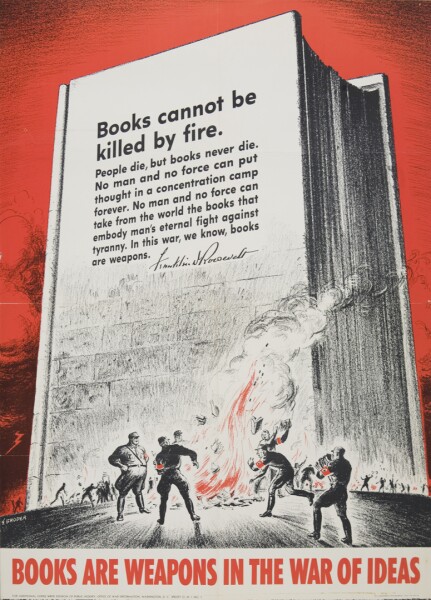 2 of 6
BooksareWeapons.jpg
BYU Museum of Art 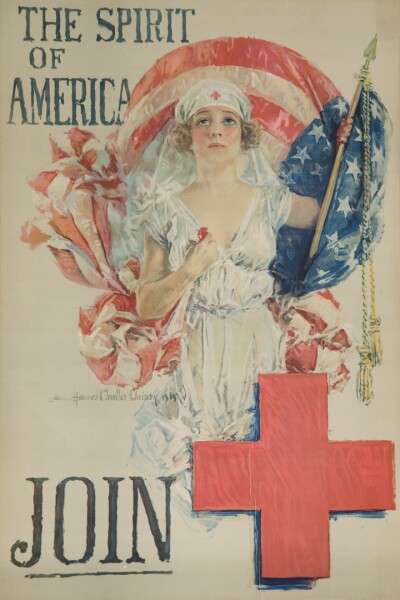 3 of 6
SpiritofAmerica.jpg
BYU Museum of Art 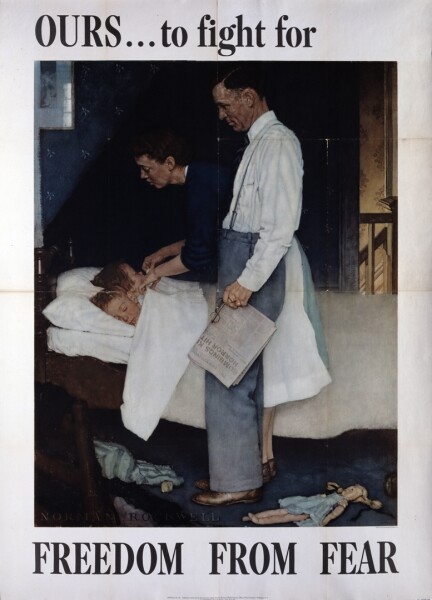 4 of 6
Freedom_From_Fear_Poster.jpg
BYU Museum of Art 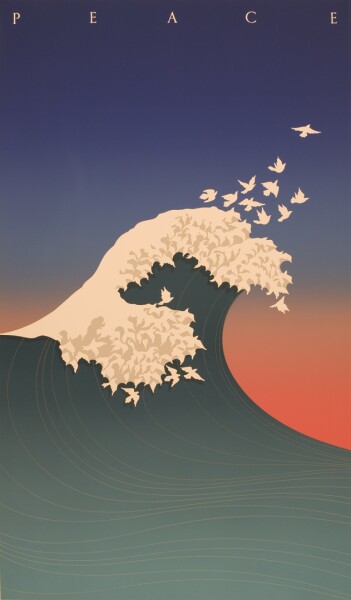 5 of 6
Magleby.jpg
BYU Museum of Art 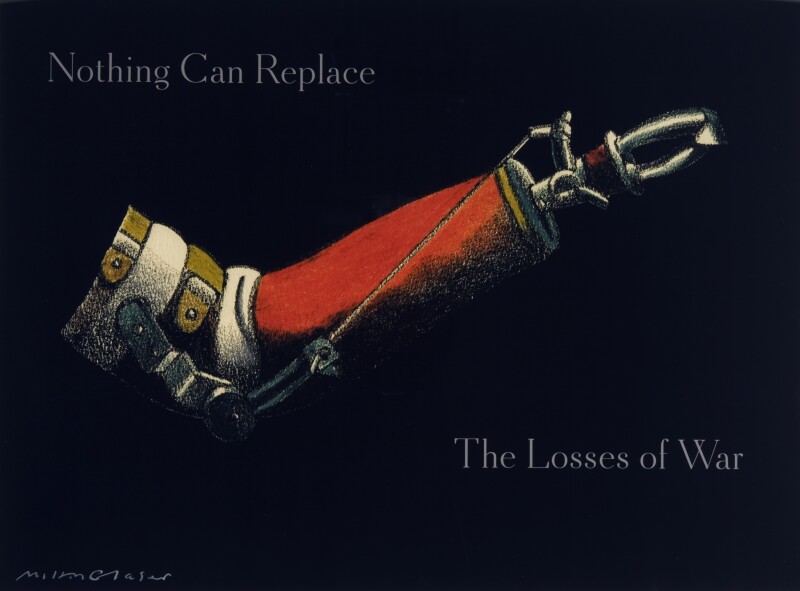 6 of 6
Glaser.jpg
BYU Museum of Art
1 of 6
Download this Gallery By clicking this link you agree to our Terms & Conditions
Related Articles
data-content-type="article"