Under President Bateman's leadership, BYU adopts Institutional Objectives, centered on BYU's Mission Statement and Aims of a BYU Education. Objectives outline standards and aspirations set for BYU by the Board of Trustees: 1) Educate the minds and spirits of students. 2) Advance truth and knowledge. 3) Extend the blessings of learning. 4) Develop friends for the university and the Church.

President Bateman makes mentored-student learning a top priority, including the mentored-student learning environment program. In the first year, $300,000 are disbursed to colleges for this program. During the third year, $10 million are distributed for mentored learning, helping more than 4,000 students. BYU sees a record number of undergraduate and graduate students publish papers or produce and exhibit creative works.

Renewed emphasis is given to attending devotionals and forums, the weekly assembly held in the Marriott Center for all members of the campus community. In the annual alumni survey, devotionals and religion classes are marked as among the most important elements for both intellectually enlarging and spiritually strengthening students.

As part of natural turnover, about one-third of BYUs permanent faculty are replaced. In the process, BYU attracts top women and men scholars, committed to the values and mission of BYU, from leading domestic and international universities.

BYU's largest capital fund-raising campaign exceeds its goal of $250 million in 1999, raising more than $400 million. Following the campaign, the Presidents Leadership Council (PLC) is formed to advise the president and BYU Development Office on fund-raising matters. With this support, BYU goes on to exceed yearly expectations for fund-raising, especially in light of market conditions. During his tenure, the president is instrumental in raising more than $750 million for the university.

BYU raises enrollment cap from 27,000 to 29,000 and offers an open-enrollment summer program. In addition, the university offers a Bachelor of General Studies degree that can be earned entirely through enrollment in continuing education courses.

BYU receives a record $313.8-million gift from General Motors Corp., Sun Microsystems and EDS through an alliance formed among the three to support academic institutions with computer-based engineering and design tools known as PACE (Partners for the Advancement of CAD/CAM/CAE Education). To date, it is the largest single PACE contribution to any university.

BYU's Division of Continuing Education grows to one of largest in the United States, with nearly 450,000 enrollments from all 50 states and such countries as Canada, China, Guam, Japan, Kuwait, Slovakia and Thailand. The Division's Department of Independent Study now offers 250 courses on the Internet. BYU also establishes the Center for Instructional Design for faculty and creates an Internet curriculum to complement paper-and-pencil courses through Independent Study.

BYU launches BYU-TV, a national network that brings BYU devotionals and other family programming to more than 20 million households.

The university is ranked among the top 50 of Yahoo! Internet Life's "Americas Most Wired Colleges," with BYU showing 100 percent of its dorms and 60 percent of its classrooms Internet wired.

BYU establishes the Ira & Mary Lou Fulton Supercomputing Center, with the facility now housing five supercomputers, giving BYU one of the largest educational computing capacities in the United States. The supercomputers are used not only by faculty and graduate students but by undergraduates in almost every college. The university also creates a million-dollar virtual reality theater to enhance the output of work done using the supercomputers.

BYU continues to attract international students from more than 120 countries and to have performing groups tour nationally and internationally, typically presenting more than 150 performances in up to 20 countries each year. Approximately 72 percent of BYU students speak a second language. The first International Vice President is named at BYU, and the Global Management Center is established. The U.S. Department of Education selects BYU as the headquarters of the National Middle East Language Resource Center.

BYU is recognized by the Institute of International Education as a leader in sending students on study abroad programs, with the university holding the top spot in 2001.

BYU is showcased during the 2002 Olympic Winter Games in Salt Lake City, with BYU performing groups presenting 151 shows in 17 days.

The Women's Cross Country team captures three NCAA championships, with the Men's Volleyball Team claiming two NCAA championships. For the past six seasons, BYU Athletics ranks in the top 25 of the Sears Directors' Cup a national tally of the strength of overall athletic programs administered by the National Association of Collegiate Directors of Athletics.

Construction is completed on 36 new buildings, including the underground Harold B. Lee Library addition, which increases the library's size by 50 percent, and WyView Park (BYU's newest family living facility), which consists of 30 buildings. In addition, another four buildings are completely remodeled, including the Eyring Science Center, the McDonald Building, the McKay Building and the Wilkinson Student Center. Construction is underway on another three buildings: the Joseph F. Smith Building to be completed in 2004 and the Student-Athlete Center and Indoor Practice Facility, both to be completed in late fall of 2003.

BYU creates the David O. McKay School of Education, School of Family Life, School of Technology and School of Music and opens several new centers, including the Student-Athlete Academic Center, the Jacobsen Center for Service and Learning, the Neuroscience Center and the Center for Remote Sensing. The Foundation for Ancient Research and Mormon Studies (FARMS) joins BYU and becomes part of the Institute for the Study and Preservation of Ancient Religious Texts.

The BYU Creamery names a recent flavor of ice cream "Merrill's ABCs," a combination of almonds, berries and chocolate. 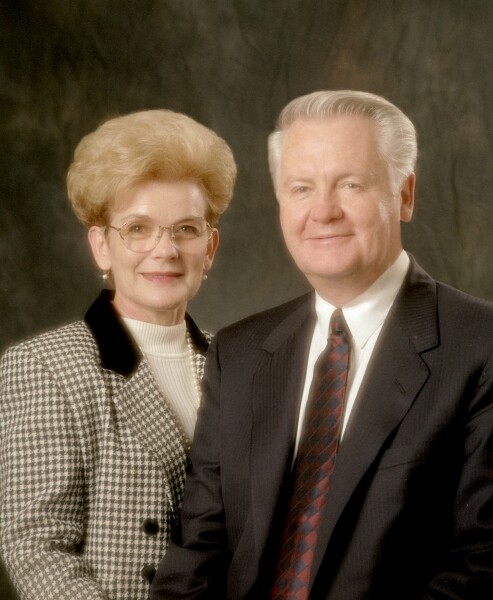 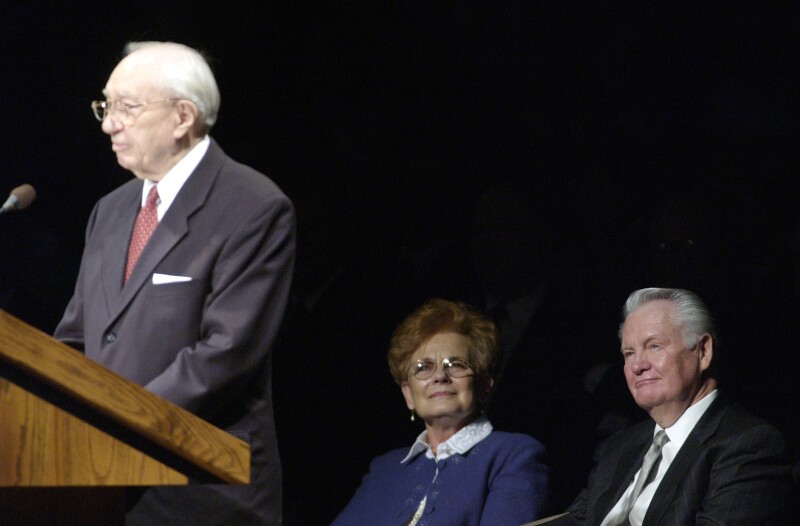 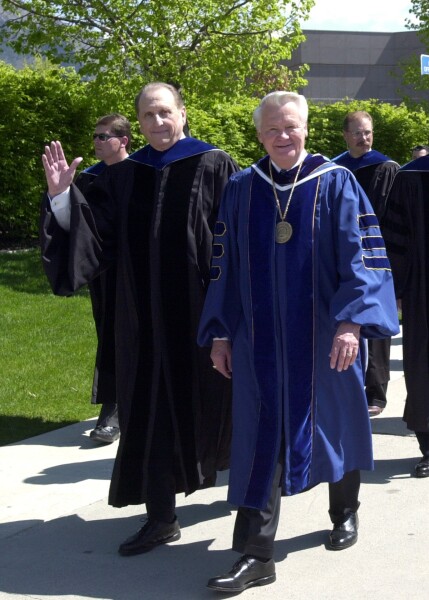 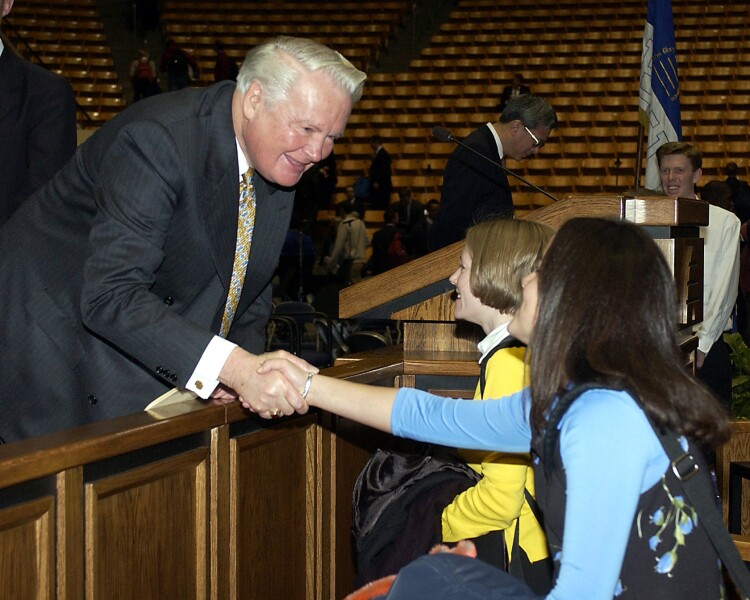 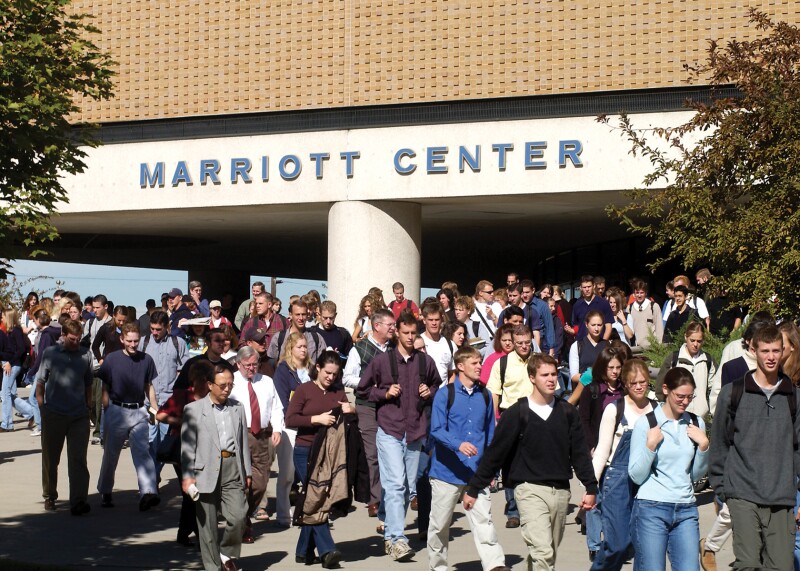 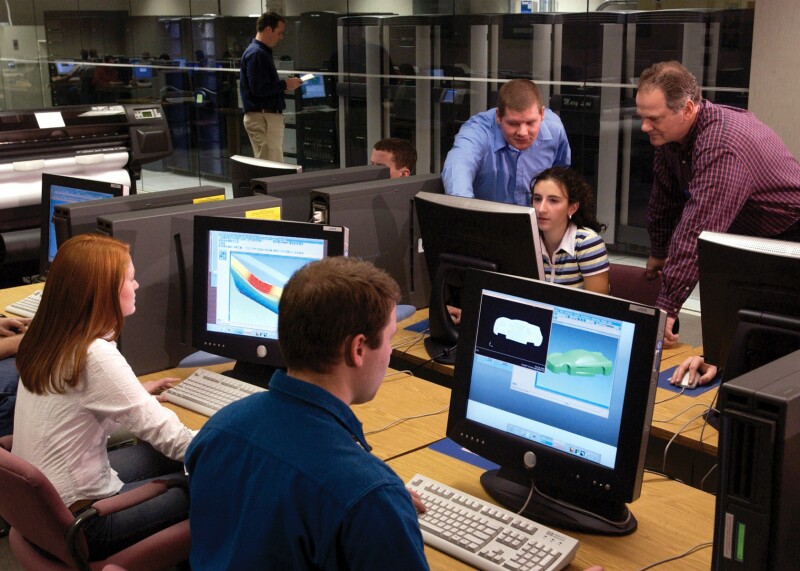 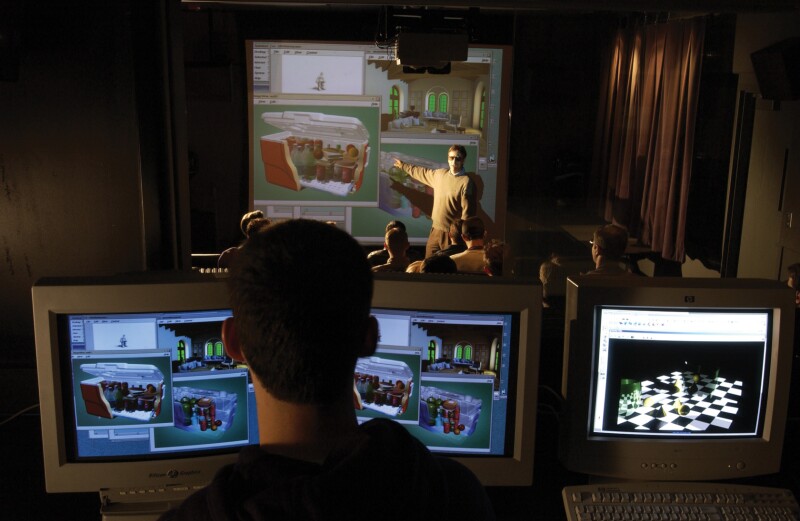 7 of 7
supercomputer-h.jpg
Jaren S. Wilkey/BYU Photo
1 of 7
Download this Gallery By clicking this link you agree to our Terms & Conditions
Related Articles
data-content-type="article"