The family that prays together … feels connected, unified and bonded with less relational tension

Religiously, ethnically and geographically diverse sample shows how praying together as a family helps families


In a recently-published study in the Journal of Family Psychology, BYU researchers explored how family prayer influences family relationships, finding a connection between prayer and a number of benefits for families.

The 198 Christian, Jewish and Muslim families in the study lived in 17 different states and represented eight religious/ethnic faith communities. Family members were asked questions such as “Does your relationship with God influence your family relationships?,” “How does your family overcome major stresses and problems?” and “How do you share your faith with your children?”

None of the questions actually included the word prayer, but while coding the interviews, the researchers found 96 percent of the families referenced prayer in their responses, with 3,868 references in their interviews in total. The references were sorted into various categories.

“Many families loved to pray together, and it was the most important practice in their daily lives,” said Joe Chelladurai, BYU PhD student in the School of Family Life and lead author of the study. “As a family ritual, it was more than just putting up with the experience and getting through it. Family prayer provided sacred time and space to connect with God and with each other. It was a time of togetherness and interaction and a space to express love and concern for each other.”

Some of the themes from participants’ responses, listed in the results of the study included:

In the interviews, parents indicated their eagerness to instill meaning and a sense of ritual to prayer. It was important to them to pass this on to their children. Children reported that they learned to pray through their parents’ examples. It was evident that a flow of religious direction and communication was occurring during this time. Family prayer was a practice, but also a means to transmit faith.

“When families together turn their hearts to God it also turns their hearts to each other across generations,” said David Dollahite, BYU family life professor and a coauthor of the study.

Families passed on religious practices as traditions. For example, a Conservative Jewish couple talked about this special addition to their mealtime blessing:

We say prayers before dinner every night, and that was actually a decision we made when my grandfather died. One of the memories I had of him was that he wouldn’t sit down to a meal without saying a blessing: “Thanks for this bread.” When he died, we decided, “Let’s do that before each meal, that we’ll remember him for eternity.” And it really stuck. We started doing it right away, and we have been doing it every day since his passing. (Boaz, father)

Mommy and Dad would pick us up together and share their ideas for praying. We learned to pray like they did, like my Mom did, and that’s really cool because she’s awesome at praying.

Addressing issues and concerns of individuals in the family

Although the religious nature of prayer was directed toward God and worship, the content of family prayers served as a valuable interpersonal communication tool for family members. Prayers often included individual as well as family issues.

“While some family prayers are rote in nature, often families offer what social scientists call ‘spontaneous petitionary prayers,’” Dollahite said. “These often involve asking God to assist family members with challenges and ask for help in meeting each other’s’ needs.”

My eldest daughter was very nervous and afraid when she was in medical school. Our whole family would kneel down and pray for her whenever she had an exam. She felt great peace in her heart.

[Family prayer is] a tradition I’ve come to really love because it helps our faith, and when we hear each other pray it helps to understand maybe how that person’s day was that we didn’t quite get when we were just conversing. When you pray it’s truly what’s coming from your heart and what you need help with and what you’re maybe struggling with and what you’re really thankful for. I think it helps us to understand the other person a little bit better. It gives us a little bit more insight to what’s going on with them.

“Several families reported feelings of connectedness with each other as a result of family prayer,” Chelladurai said. “This connectedness was experienced relationally and spiritually as well. For example, a family reported that holding hands generated a sense of both physical and spiritual connectedness between family members.”

I love the fact that when we sit down as a family … [we] say the HaMotzi, which is our blessing over the bread. And that [we] hold hands, and that we look at each other.

Before we leave home, we pray. Before we encounter or go through anything, we pray as one, being connected as a whole and being on the same spiritual plane to come together in prayer.

Many families found that regular prayer together eased relational tensions and facilitated better relationships. In resolving conflict, many participants also used prayer individually to center or restrain themselves, helping them calm down before interacting directly with family members to relieve tensions or reconcile.

When we’re in a moment of conflict, it might just be that, the little stuff, like sometimes the whining of the younger children or the demands. That’s when I’m feeling really angry, when I pray the most, ’cause I just feel like I really, really need it. I need something to grab onto. It’s like, ‘Please . . . restrain me. I just want to hit someone right now. Calm me down, give me perspective, [give me something] to say to the little ones.’ … And it’s very real … it’s not just like I’m reciting some poem or something; it’s a conversation … It always helps.

You’re balancing yourself through your worship with each other. … You are doing this as a family unit, you are doing it as a community unit, and it’s really balancing. … That is really the key.

The Struggle is Real

Despite largely positive reports from most of those interviewed, families also expressed struggles in praying together.

“Sometimes families struggle in getting everyone together,” Chelladurai said. “Or, even if they do get everyone together, they may just go through the motions. Scholars have called such rituals as ‘hollow’ rituals, which may not necessarily have many of the reported positive outcomes as found in the study.  Other families may have family members with differing beliefs or lack of meaning and may not be able to pray together, or may have had negative experiences in the past regarding prayer.”

But for the majority of those in the study, the researchers found when families got to the point where prayer became meaningful, it was helpful.

“When family prayer was observed as a naturally occurring family ritual with the harmonious participation and involvement of family members, it reportedly facilitated positive relational processes and affective outcomes that had transcendent meaning—greater than the actual event,” Chelladurai said.

Considering the struggles families have regarding prayer, the researchers offer the following tips:

The family that prays together … feels connected, unified and bonded with less relational tension 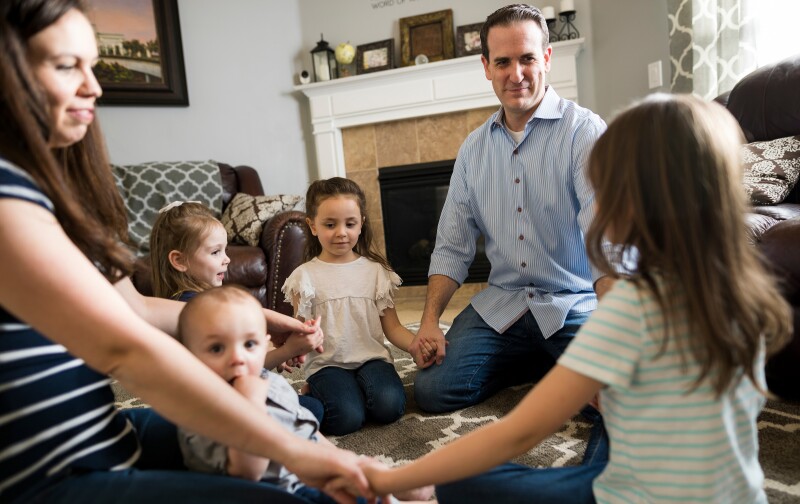 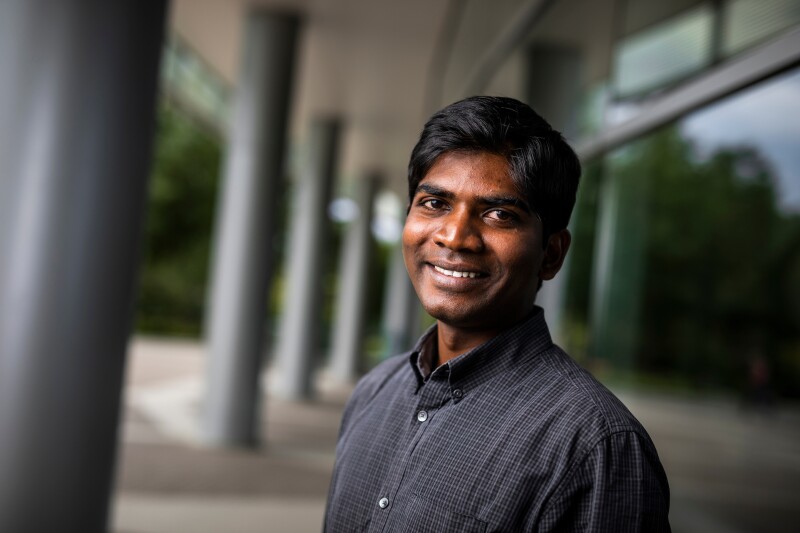 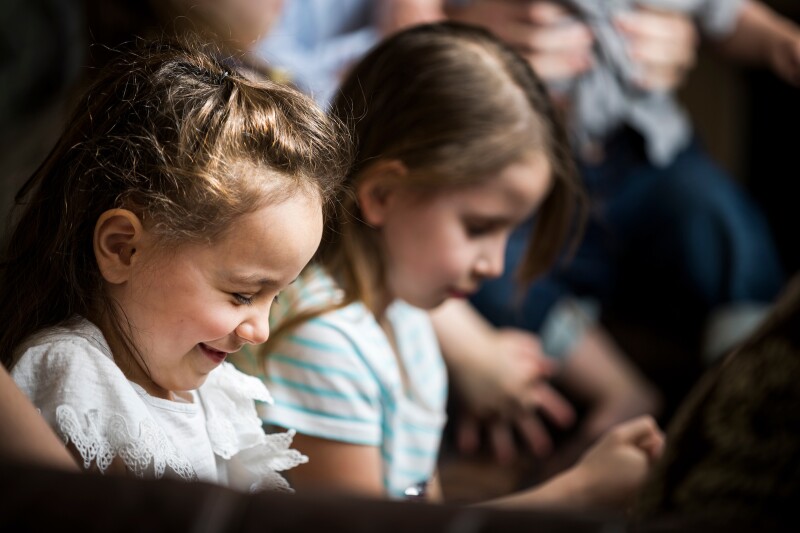 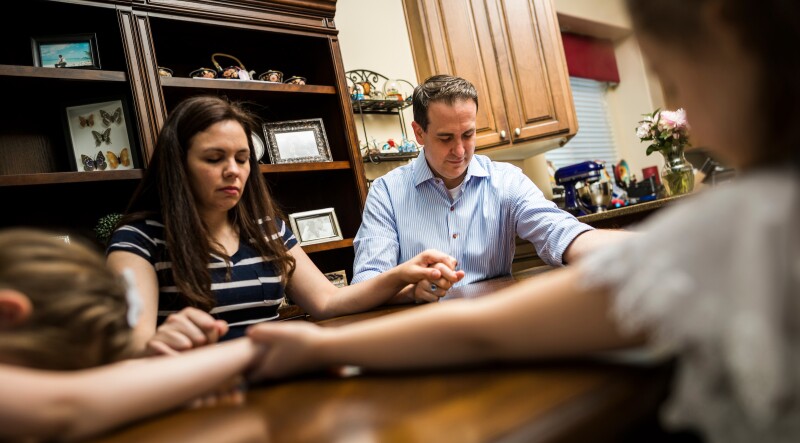 4 of 4
Family Holding Hands for Prayer
Nate Edwards/BYU Photo
1 of 4
Download this Gallery By clicking this link you agree to our Terms & Conditions
Media Contact: Jon McBride
Related Articles
data-content-type="article"