St. John defined courage as "moving toward a problem, rather than running away from it," and leadership as helping others see a bright future and working with them to build that future.

Speaking directly to her student audience, St. John expressed her optimism for BYU students’ futures, citing BYU's Honor Code as an example of holding oneself to a higher standard.

"I'm betting on the people who are strong, healthy, clear and want to do the right thing," said St. John. "Greatness is a series of small decisions. I'm not one to take the easy road either."

As a young girl, St. John lost her right leg to amputation after stunted growth. Although the loss could have been discouraging, St. John relied on her optimistic attitude.

Growing up in a rough neighborhood of San Diego with a single mother at home, St. John described herself as a "poor, one-legged black girl from the wrong side of the tracks." She bussed across town to attend school in a nicer neighborhood. A school friend asked her to go skiing with her over the holidays. Though the learning curve was difficult, St. John quickly fell in love with the sport and set her eyes on tougher competition.

"Although we didn't have much in common, Barbara's reaching out across our differences to invite me to come skiing eventually resulted in the U.S. winning more Olympic medals," said St. John. "We are stronger because of our differences."

With the dream to be a top skier, 16-year-old St. John moved from California to Vermont to attend private skiing high school Burke Mountain Academy. Because of her circumstances at home, she struggled to find the appropriate funding to pay for the boarding school, but knowing of the tremendous efforts St. John went through to finance her education, the headmaster invited her to attend.

St. John's problems, however, did not end there. While at the school, St. John broke her "real" ankle and her prosthetic leg, making her unable to ski.

"At the time my attitude was, 'this is my chance for greatness!'" said St. John. "I thought some responsible adult would intervene and tell me to quit, but no one did and I wasn't going to be the one who stopped myself."

St. John's determination eventually led her to ski again, winning multiple medals at the Paralympics. Continued hard work resulted in a degree from Harvard, a Rhodes Scholarship to Oxford, work in the White House as Director of the National Economic Council and CEO of the Blue Circle Leadership Institute.

St. John emphasized that students at BYU have already been preparing to become courageous leaders by serving missions, living the Honor Code and including others.

"To be able to persevere and find greatness in yourselves is uncomfortable," said St. John. "Greatness is different than the mainstream. That is why I have hope for all of you."

Concluding her Forum address, St. John issued a challenge to embrace diversity and look for opportunities to reach out to people of different colors in the United States, abroad and in the LDS Church.

"We all need to come together and be strong," St. John said. "Keep your heads clear and your hearts open. We need you now."

Next Devotional: Jodi Maxfield, Coach of the Cougarettes

The next BYU Devotional address will be given by Jodi Maxfield on Tuesday, Nov. 29, at 11:05 a.m., in the Marriott Center.

Her remarks will be broadcast live on BYUtv and BYUtv.org, KBYU-TV 11, Classical 89 FM and BYU Radio. 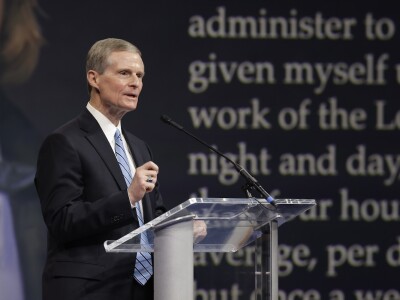