Although they may not recognize him by name, many Christians around the world know and love the religious paintings of Lutheran Danish artist Carl Heinrich Bloch. Beginning this fall, those who have admired reproductions of Bloch’s work will be able to see many of his original paintings at the Brigham Young University Museum of Art.

“Carl Bloch: The Master’s Hand” will feature five large altar paintings from churches in Denmark and Sweden. Four of these paintings will be taken out of their altar settings for the first time since they were originally installed in the late 1800s. The other altar painting, “Christ Healing the Sick at Bethesda,” has become the museum’s signature piece since it was acquired in September 2001. Additional religious paintings and etchings along with genre, history, portrait and landscape paintings from Danish museums also will be included in the exhibition.

The exhibition will be on view in the Marian Adelaide Morris Cannon Gallery on the museum’s main level from Friday, Nov. 12, 2010 through Saturday, May 7, 2011. The museum will extend its operating hours for this exhibition. For the run of the show, the museum will be open Monday through Saturday from 10 a.m. to 9 p.m. Admission to the exhibition is free; however, visitors must register for tickets online before their visit. Free tickets will be available at CarlBloch.byu.edu.

Carl Heinrich Bloch (1834–1890) was one of ten children raised in a devoutly religious merchant family in Copenhagen, Denmark. Even as a young boy, Bloch’s artistic prowess was evident.  Despite his parent’s concerns about their son’s career choice, they allowed him to enter Copenhagen’s Royal Academy of Art. In 1859 Bloch was awarded a travel scholarship from the Academy to work in Rome.

During his stay in Italy, his works began to reflect deeper concern for human emotion and spirituality, reflected in his highly acclaimed paintings of religious and historical scenes. In 1864 he was elected a member of the Royal Academy of Art. In 1865, near the end of his Italian studies, he received a commission to create 23 paintings on the life of Christ for Frederiksborg Castle, which took him 14 years to complete.

Later in his career, he painted eight large altarpieces for churches in Denmark and Sweden, including the beloved “Christ Healing the Sick at Bethesda.”

Bloch amassed numerous awards and honors during his lifetime, but fell out of favor in his own country as Modernism engulfed the art world by the end of his life. In the middle of the 20th century, nearly half a world away, The Church of Jesus Christ of Latter-day Saints introduced Bloch’s paintings on the life of Christ to its members in the “Improvement Era” magazine.

Since then images of his paintings have been used in the LDS Church’s “Ensign” magazine and numerous church manuals. Reproductions of his paintings are seen in LDS meetinghouses, temples and visitors’ centers throughout the world. Members of the LDS Church are hardly the only ones who have found value in Bloch’s images of the life of Christ. Bloch-related prints and gift items are found on numerous Web sites; and his images have been used for a wide variety of publications, including a Japanese illustrated Bible, rosary meditations, teaching illustrations in Catholic Sunday schools, note cards and stationery, jigsaw puzzles, calendars, cross-stitch and embroidery kits, mugs, mouse pads, and tote bags, just to name a few.

Now, after several years of negotiations with the churches and museums of Denmark and Sweden, nearly 30 of Bloch’s original paintings will travel to the Museum of Art to be seen together for the first time.

What is it about the religious paintings of this Danish artist that is so appealing to Christians around the world? Dawn Pheysey, curator of religious art at the BYU Museum of Art, explained that a thoughtful study of Bloch’s works suggests several distinctive qualities that make his images so captivating.

“Certainly his academic training at the Royal Danish Academy of Fine Arts and his studies in Italy were pivotal in his development as a significant painter of religious and historical paintings. His careful observation and attention to detail provided the qualities necessary to make him a great genre and portrait painter,” Pheysey said. “But it was his tender and sensitive soul that defined his ability to portray the plights of others with kind consideration, and his deep-seated faith that enabled him to render compelling images of the Savior with devotion and love.”

According to Campbell Gray, director of the Museum of Art, Bloch’s religious works have the capacity to illuminate the life and mission of the Savior with extraordinary power and insight. “Instead of simple storytelling, he employs visual devices to engage the viewer in a direct moral conversation about the personal choices proposed by a painting’s story,” Gray said. “His paintings affirm Christ’s mission of salvation and, at the same time, challenge the viewer to make the tough choices that bespeak a living faith.”

Although Bloch produced more than 250 paintings and 75 etchings during his lifetime, he considered his religious paintings to be his most important contributions. His artwork continues to touch sensitive viewers today as they contemplate the life of Christ.

The Museum of Art has produced an iPad application to enhance the gallery experience for this exhibition. iPads pre-loaded with this app can be checked out before entering the gallery for a rental fee of $3. The in-gallery iPad experience has been designed to enhance viewers’ understanding and appreciation of the work of Carl Bloch. It has multiple segments that contextualize the paintings by showing their original locations in Denmark, explain the nuances of each work within its Biblical setting, and educate viewers about specific artistic techniques and their significance.

For more information about this exhibition, call the BYU Museum of Art at (801) 422-8287, send e-mails to moa@byu.edu, or visit CarlBloch.byu.edu.

1 of 2
72-The-Doubting-Thomas-emai.jpg
BYU Museum of Art 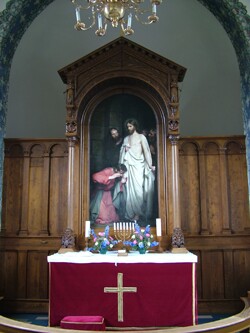 2 of 2
thomas.jpg
Kenny Crookston/BYU Photo
1 of 2
Download this Gallery By clicking this link you agree to our Terms & Conditions
Tags
Art
Related Articles
data-content-type="article"