When she was growing up, Emily Savage loved playing with Legos(TM).
“It wasn’t until I was about 13 that I realized it wasn’t necessarily cool for girls,” said the BYU senior. But she went on to embrace that side of her – as well as physics and calculus – when she chose to major in mechanical engineering. And for her senior project, her experience with Legos came in handy.

Savage and her teammates were challenged to create a way to mass produce inexpensive housing blocks – like bricks, only bigger – for many rural Kenyans who live in huts made from sticks and mud.

The team came up with an innovative style of interlocking blocks, made from a soil mixture that’s only 5 percent cement. The connections of the blocks mean they require little to no relatively expensive mortar. And they need only sunlight to cure, not a fire, which is significant in the badly deforested lands where they will be used.

The BYU team is sponsored by U.S. Synthetic and its founder Louis Pope, now a philanthropist living in Kenya. The partners came together via the Capstone program at the Ira A. Fulton College of Engineering and Technology, which includes 30 industry-sponsored product design projects each year.

“Kenyans take a lot of pride in their homes – the dirt grounds are swept every day,” Pope wrote in an e-mail. “If they have extra resources they are very likely to use better building materials so they can improve their homes.”

Pope was troubled by the erosion of the mud-and-stick shelters during the rainy season and sought a way that villagers could play a major role in the construction of improved houses. He suggested existing block-press machines as a jumping-off point when handing the project over to the BYU team.

The students experimented with a block press that was currently available. When you fill it with soil, cement and water and then manually compress it, it produces rectangles about a foot long that make decent exterior walls. But without any way to interlock with each other, the blocks are difficult to use for corners. Interior walls, doors, windows and even the corners of the exteriors, either don’t work well or require so much cement that they aren’t economically feasible.

Their solution is a three-segment block with three protrusions on top and three indentations on the bottom. Not only can the blocks lock together with a minimal amount of mortar, but they can be broken apart to stack in ones or twos, perfect for making corners. The students recalled playing with blocks as kids to build play structures and incorporated part of those experiences in their concepts for the blocks.

“Once we had this block design, then we had to come up with a press to make it, and that was the tricky part,” said Savage.

They fashioned an entirely new press out of steel, testing various cones and cylinders to make the interlocking features. At first the protrusions wore away or fell off. So the team spoke to some soil and brick-making experts, who suggested a change to the angle of the mold inside the press.

Now, using only muscle-power, the team can make the sturdy blocks out of soil, water, and a little cement. They say a team of four people could make about 400 blocks a day. A Kenyan home would require about 2,000 blocks.

Their press was designed to be mass-produced by a manufacturer at a reduced cost so that Pope can get the units to those he’s working to help.

“It’s sobering to think that someone will be tucking their kids into bed in a home made out of blocks from our press,” said Stanton Woods, credited by team members with the main idea behind the new style of block, who will begin a master’s in architecture at the University of Utah in the fall.

The team members were motivated by this human side to their technical project – they consistently worked two hours a day at it from early September.

“The potential to make better housing available to even a few more people, that really means a lot to me,” said Joran Booth, who has been accepted for a master’s program in mechanical engineering at Purdue.

Pope is excited about the potential for the team’s design.

“We’ve sponsored several Capstone projects over the years and have been thrilled with the results,” he wrote. “This team, however, may be the best one so far.”

The Capstone course began at BYU in 1990 with just four projects and has expanded to include approximately 30 industry-sponsored projects each year with a total of 545 completed projects over the past 20 years. The program has worked with more than 200 companies from 25 states and 11 different countries with ongoing international efforts. 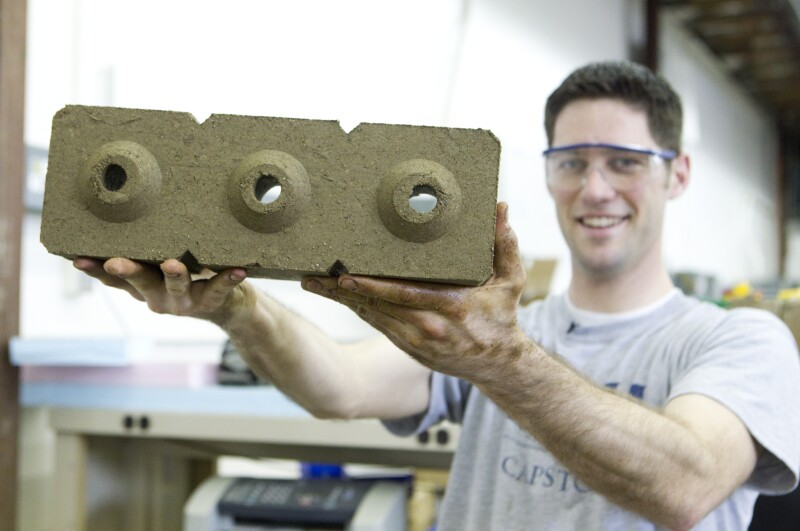 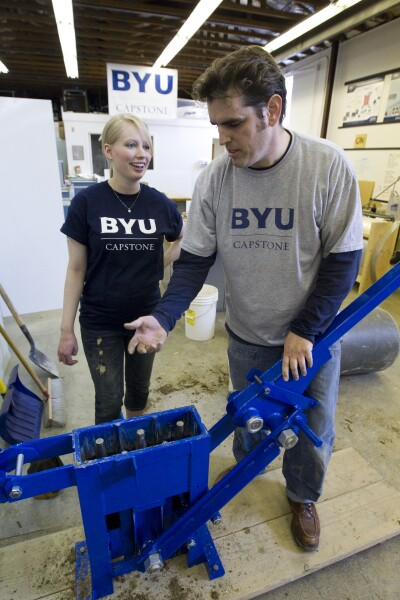 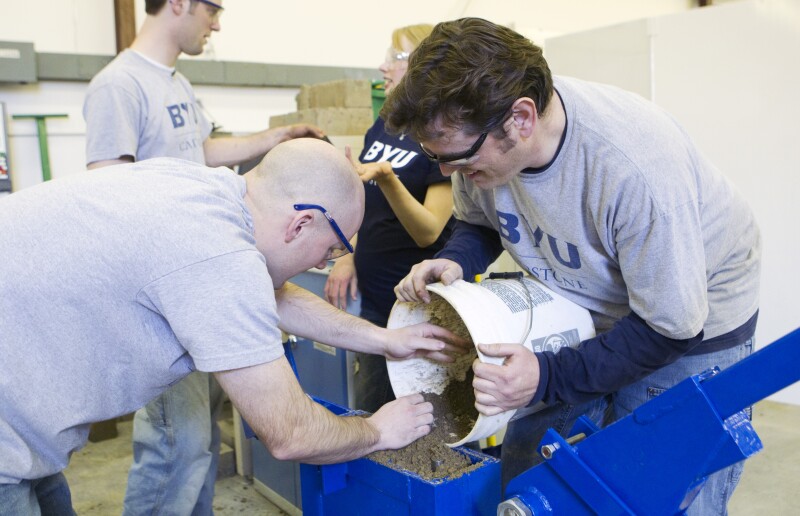 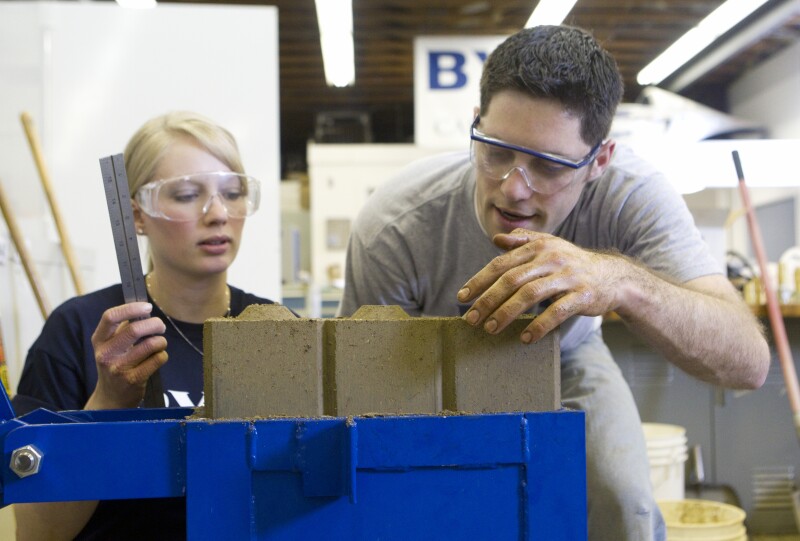 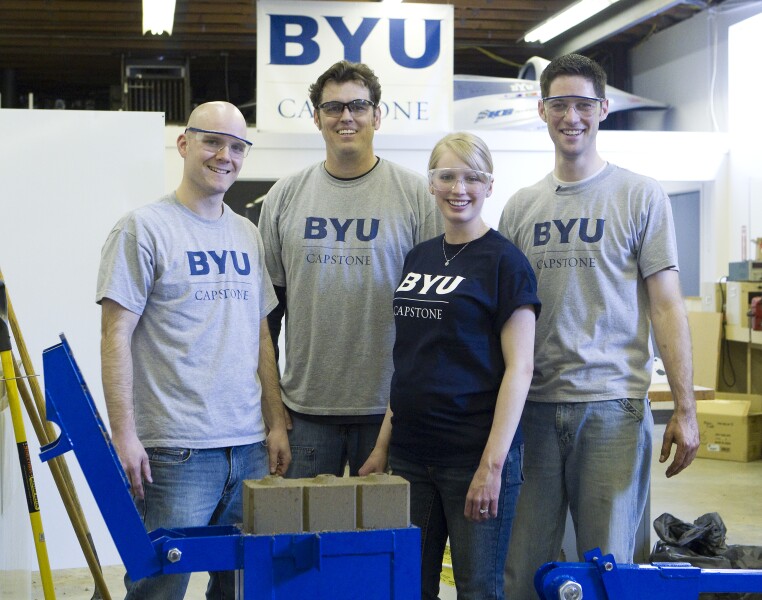 5 of 5
1003-51 090.jpg
Jaren S. Wilkey/BYU Photo
1 of 5
Download this Gallery By clicking this link you agree to our Terms & Conditions
Related Articles
data-content-type="article"