Brushing your teeth, typing an email, turning pages in a book, flipping pancakes. Jeane Taylor, a mother of two busy boys, struggles to do these everyday tasks without fingers.

She had fought off septicemia, a life-threatening blood infection that kept her in the hospital for most of last year. Complications led to the amputation of her lower legs and fingers. But an indomitable spirit and remarkable poise motivated Taylor to seek out tools to help her regain as much ability as possible.

Through a family connection, a BYU engineering professor heard about her struggles and volunteered to help. Taylor become a beneficiary of the mechanical engineering department’s Capstone program, which pairs teams of students with actual companies seeking product enhancements. Sponsorships typically cost $20,000, but in this case, the Capstone program itself sponsored a five-student team to craft a custom prosthetic hand.

Taylor, a St. George resident and BYU alum, felt blessed by the opportunity.

Taylor has considered other prostheses and, while she hasn’t entirely ruled them out, she is most concerned about functionality. Taylor found -- and the students’ research reaffirmed -- that products currently on the market are either too expensive or purely cosmetic. They decided to develop a more feasible alternative that puts function over form.

“They wanted to make life easier for me, to give me some type of function in my right hand,” Taylor said. “Just the whole concept itself was overwhelming to us. We thought that it was so sweet that they wanted to do anything. “

The team started by finding out her most important needs. They then did 3D scans to find out the exact shape of Taylor’s palm and arm in order to make the best fit. They also tried to use only the palms of their hands for an entire day to understand more intensely how their “client” lives.

“She’s a very uplifting person who is still overcoming obstacles,” said team member Kyle Smith, who has accepted a position with GE after graduation. “This device can help her to continue to fight.”

“This is not your normal school project where you just have to do your best,” said Murray, who will pursue a master’s degree in the fall at Purdue’s top-10 mechanical engineering program. “This has much bigger implications.”

The prosthetic device utilizes a clamp to provide strength and finger functionality by allowing Taylor to grab both large items and finer things, such as the page of a book.

“One of the things she mentioned wanting was to be able to turn the pages of her boys’ books,” Murray said. “She misses not being able to do the little things with ease; she would like to regain more of her independence.”

The device attaches to Taylor’s forearm and uses wrist motion to activate a clamp. A forward motion opens the clamp wide enough to hold a cup or just enough for a book page. A backward motion closes it for a secure grip.

The team developed numerous prototypes and traveled to St. George to get Taylor’s feedback and make improvements. About a month before the end of their course, she mentioned that it might be nice to hold on to something while moving her wrist.

At the next team meeting, the prospect of adding such significant new functionality with such a short time left seemed daunting. But the team decided to go for it. The final version includes a locking mechanism that works like a charm.

“She’s provided lots of design input,” Murray said. “Her kids called it ‘mommy’s robot hand’ and wanted a turn trying it out.”

The team planned to have the aluminum device anodized, a process that would make it corrosion-resistant and meet Taylor’s request to wash dishes and bathe her sons. They sent her colors to choose from and “she lit up when she saw the pink one,” Murray said.

The team made final improvements during BYU finals week, even after their final presentation for the graded portion of their course.

The students were drawn to the project because they would be able to apply techniques learned in the engineering program to make a difference.

“Rather than work on something for a big company, this is more personal and will have a direct impact on her and her quality of life,” Smith said.

When the team presented her with the final product at her parents’ home at the end of the semester, Taylor used it to read a book to her sons and to hold a fork while she ate lunch.

“We’ve been so impressed with what they’ve come up with,” said Taylor, as her husband Tony agreed. “There has been a lot of open communication with them; it’s been wonderful.”

Murray and Smith were joined on the team by Matt Meads, Jon Pendlebury, and Jamal Hong. They were coached by Mark Colton, assistant professor of mechanical engineering.

Although there are no immediate plans to mass produce the device, BYU has filed for a provisional patent that could be licensed to a company that wanted to do so. 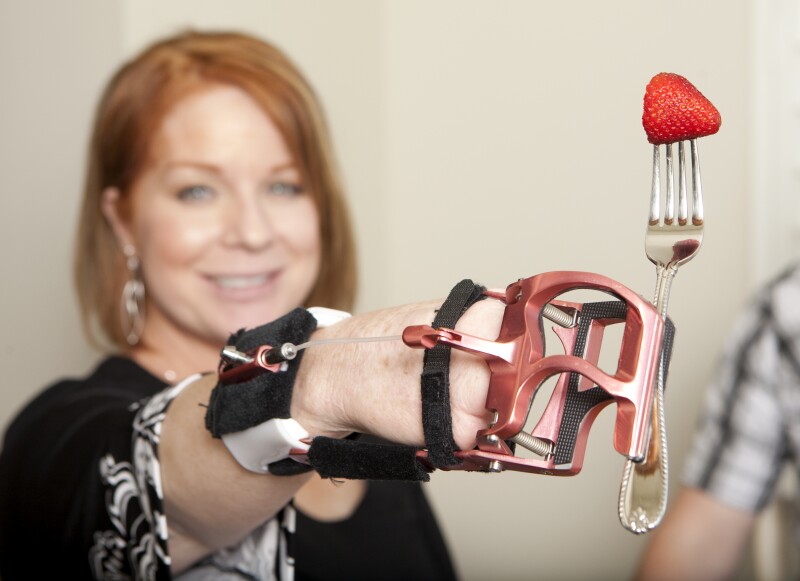 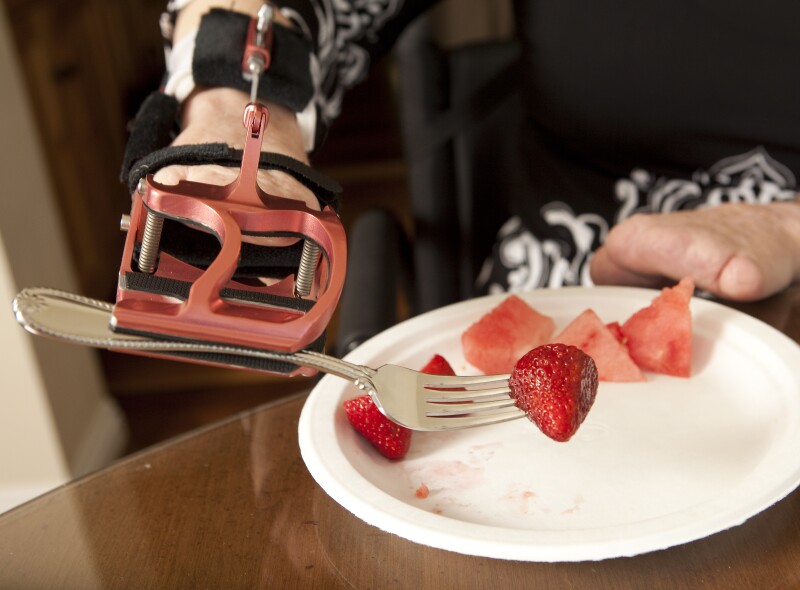 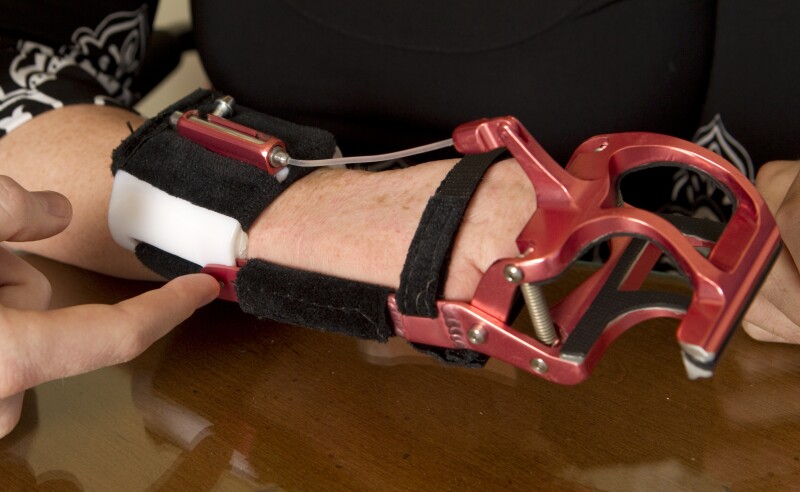 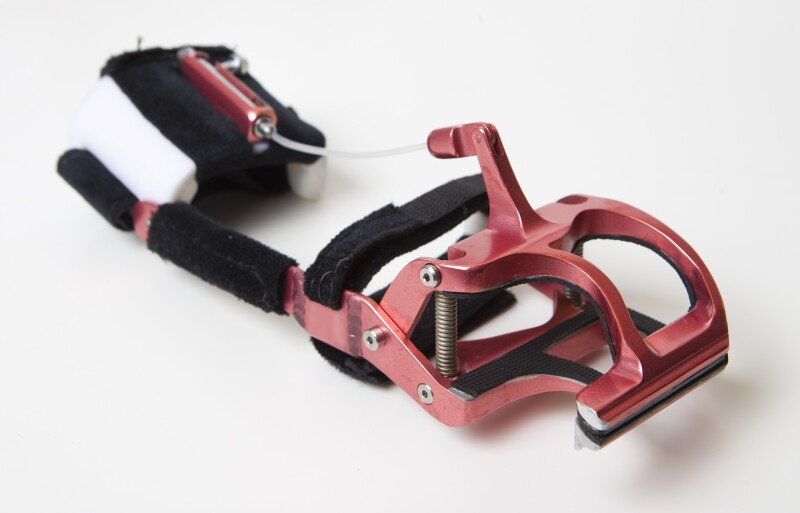 8 of 8
1004-33 117.jpg
Jaren S. Wilkey/BYU Photo
1 of 8
Download this Gallery By clicking this link you agree to our Terms & Conditions
Tags
Mechanical Engineering
Related Articles
data-content-type="article" 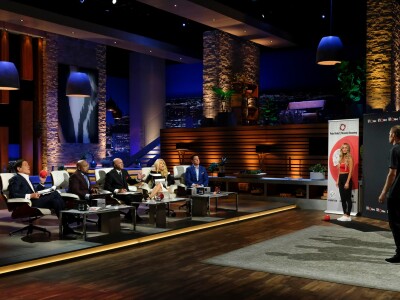 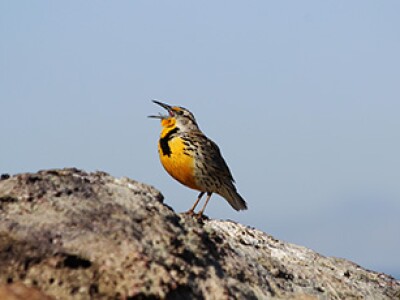 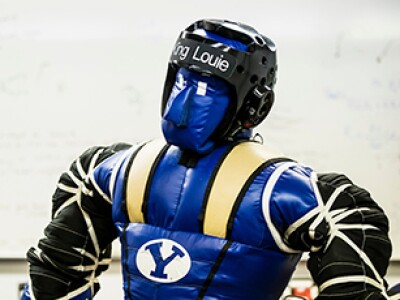