“The current process involved in the creation of these drugs, which have the potential to benefit so many, is wasteful,” said Merritt Andrus, professor of chemistry. “Our method minimizes the time needed to create an effective batch of the key molecules used in these types of drugs.”

A study detailing the new method appears in the latest issue of the “Journal of Organic Chemistry.” Harvard-bound graduate student Erik Hicken and undergraduates Jeff Stevens and Karl Bedke join Andrus on the study as coauthors.

David MacMillan, the Earl C. Anthony professor of organic chemistry at the California Institute of Technology, says Andrus’ development of the new chemical reaction has broad implications for chemistry and biology.

“Dr. Andrus has employed lateral thinking, also known as great creativity, to find a solution to a long-standing problem that involves a chemical product widely used in the discovery and production of medicinal agents,” said MacMillan. “As such, Andrus' research in this area will gain wide attention from many scientists in the pharmaceutical industry.”

The research team’s focus was on the molecules in a forthcoming class of diabetes medications that helps increase the amount of insulin produced in the pancreas while decreasing sugar levels in the body. These molecules, called chiral molecules, exist in “left- and right-handed” forms.

Only one of the molecule’s forms produces the intended effects in the human body and is therefore vital to the creation of the drug. The second form is inactive and must be discarded. Until now, pharmaceutical companies had to create the chiral molecules indiscriminately and dispose of the ineffective, useless part.

“From a business standpoint, this is just like throwing away half of your inventory and can be rather costly,” said Andrus, whose team developed a way to ensure all of the chiral molecules produced for such medications are potent.

To do so, Andrus employed part of an inexpensive molecule related to quinine, known for its anti-malarial properties, that exhibits only “one-handedness” to force chiral molecules to form in their effective state.

Martin J. O’Donnell is a professor of chemistry and chemical biology at Indiana University – Purdue University Indianapolis and a pioneer in the use of the same quinine catalysts Andrus employed in his research.

“Professor Andrus and his research group’s novel chemistry represents a highly significant scientific contribution, and has been applied to the total synthesis of a compound being studied for the treatment of diabetes,” said O’Donnell.

Andrus has plans to improve the process and says that the method will be applicable in many situations.

“The nice thing about what we’ve done is that it’s a broad method that all drug companies could use,” said Andrus, adding that he and graduate student Hicken have already synthesized a new anti-cancer compound and have plans for anti-inflammation compounds in the works.

Even with the excitement surrounding his success in the laboratory, Andrus is even more pleased with another result – Hicken will attend Harvard in 2006 to work with Nobel Prize-winning scientist E.J. Corey, arguably the top organic chemist in the world, partially because of the work Hicken has done at BYU.

“That is the biggest reward there is – to place students in important places,” said Andrus. “To see the success of the people who have worked with you is by far the most satisfying thing I experience as a professor.” 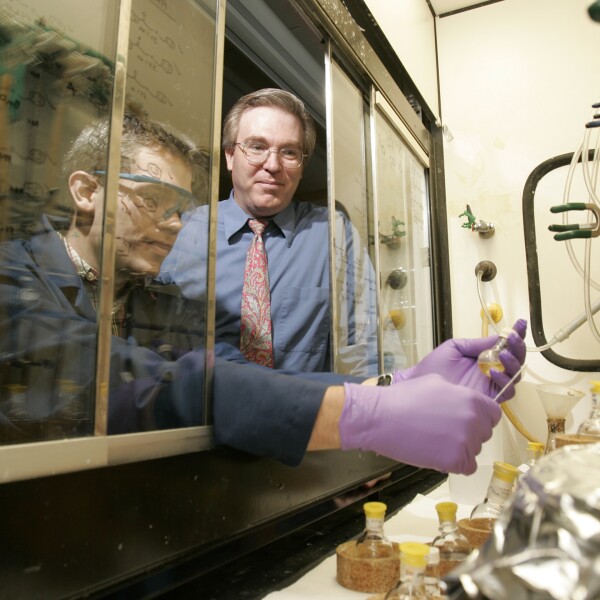 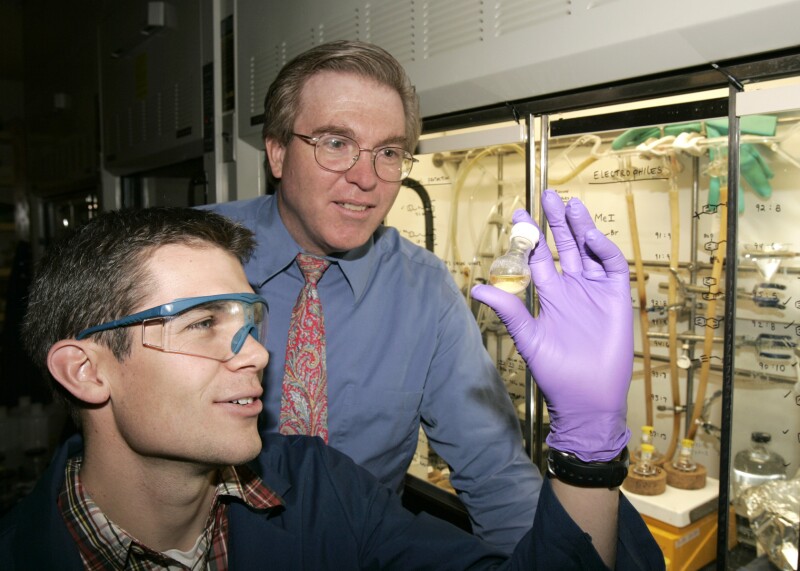 2 of 2
0510-19 12-L.jpg
Mark A. Philbrick/BYU Photo
1 of 2
Download this Gallery By clicking this link you agree to our Terms & Conditions
Related Articles
data-content-type="article"