In late June, archaeologists discovered a rare mosaic floor in a synagogue in the ancient Jewish village of Huqoq, near the Sea of Galilee.
The discovery has garnered national headlines and been described by experts as a ‘stunning’ find, given the quality of the artwork and how rare the mosaic would have been at the time.

BYU professor Matthew Grey and recent BYU graduate Bryan Bozung were part of the archaeological team that unearthed the mosaic. In fact, Bozung, now a grad student at Yale, made the initial discovery.

“Discovering a mosaic like this is one of the most exciting moments in an archaeologist’s career,” Grey said. “Uncovering a piece of art that no one has seen for 1500 years is an incredible experience.”

The mosaic, which is made of tiny colored stone cubes, dates back to the late Roman period – around the 4th or 5th century. It depicts two female faces flanking an Aramaic inscription that promises blessings upon those who keep God’s commandments.

It also depicts the Biblical story of Samson tying foxes to torches, setting their tails on fire and releasing them into nearby fields as an act of retribution against the Philistines, as told in Judges 15.

Jodi Magness, a professor of early Judaism from the University of North Carolina at Chapel Hill who is leading the dig, said the discovery suggests Huqoq was an affluent area.

“Only a small number of ancient Late Roman synagogue buildings are decorated with mosaics showing biblical scenes,” Magness said in a press release from the Israel Antiquities Authority. “This [mosaic], together with the monumental size of the stones used to construct the synagogue’s walls, suggest a high level of prosperity in this village.”

Grey, an assistant professor of ancient scripture at BYU, has been a senior staff member supervising Bozung and others in the excavation of the synagogue area where the mosaic was found.

As Bozung was excavating near the synagogue wall this June, he noticed the outline of a human face peering through the dirt and quickly called Magness and Grey.

“We were stunned when we first saw the female face staring back at us,” Grey said. “We remained captivated as we proceeded to reveal the inscription and the Samson scene.”

In addition to the synagogue, excavations at Huqoq have uncovered other materials from the ancient Jewish village, including a dwelling, a ritual bath, agricultural installations and an underground hiding complex used during the Jewish revolts against Rome.

Huqoq is mentioned in the Old Testament as belonging to the tribal lands of Naphtali (Joshua 19:34) and Asher (1 Chronicles 6:75) and is recognized in the Jerusalem Talmud for its cultivation of mustard plants.

Excavations of Huqoq’s ancient synagogue and village are scheduled to continue in the summer of 2013. 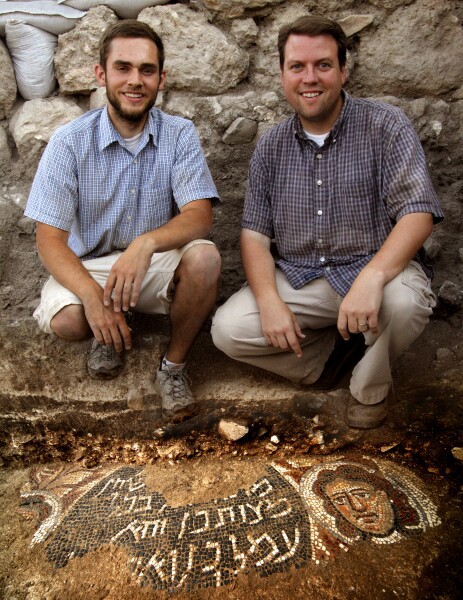 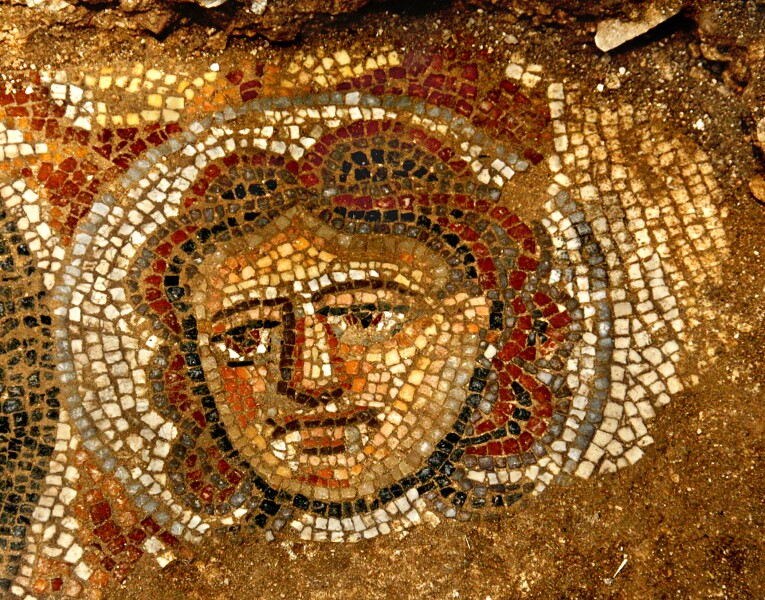