BYU prof takes a dive into ‘The Far Side’

In Kerry Soper’s new book, “Gary Larson and The Far Side,” the BYU comparative arts and letters professor discusses the comic’s complex and strange humor, artistic variance from the norms of its day and impact on modern alternative comedy.

According to Soper’s self-description, he was an awkward preteen (like one of Larson's iconic nerds) when the comic hit newspapers, and to him at that time, the comic felt fresh and edgy, like contraband material.

“It was comedy your parents didn’t really understand or appreciate, so it felt rebellious or vaguely inappropriate,” Soper said. “It didn’t feature spoon-fed platitudes like your typical newspaper comics. It was morbid, absurd, and featured dense word play and layered jokes you had to process."

A comic panel rather than strip, “The Far Side” had a “groundbreaking irreverence, absurdism (and) philosophical depth” when it hit national newspapers in the ’80s, Soper said. Its style and tone departed dramatically from such traditional comics as “Garfield” and “Peanuts,” which had returning characters and predictable, relatable story lines.

With help from Larson’s devout fanbase, however, “The Far Side” eventually became the highest ever syndicated panel cartoon and became the center of a massive merchandising industry that included best-selling books, t-shirts and calendars. But with little scholarship done on panel cartoons, Soper said he felt like he needed to justify taking Larson’s comic seriously.

“Comic historians tend to favor comic strips over panels because strips had more room to develop jokes with familiar characters and ongoing storylines; in contrast, the lowly panel cartoon usually featured only a static image and a pleasant, throwaway gag,” Soper said. Larson’s panel expanded the possibilities of panel cartoons, however, featuring layered parodies, scientific themes and jokes that required you to imagine what happened before or after a bizarre vignette.

Additionally, Larson’s cartoon art has been considered by some critics to be awkward, amateurish or slightly inept, but Soper argues that he was meticulous in his refinement and delivery of those seemingly simplistic images.

“He was very thoughtful about the way he distilled characters down to their essences,” Soper said. “He used his weakness as a self-taught cartoonist as a strength to make genuinely funny images. It amplified the comedy, in fact, that the figures in his cartoons looked flabby, awkward and stiff.”

One “Far Side” shows a store clerk at a checkout counter with shelves high above him and the deadpan caption “Inconvenience Store.” Another shows a boy with a book in one hand and his other hand pressing vainly against a door that says “PULL.” A sign outside the school reads “Midvale School for the Gifted.”

For his book, Soper interviewed a range of cartoonists and comedy writers, who reflected on the influence of "The Far Side" on their careers. The comic as a whole, he said, helped “bridge the gap between alternative and mainstream comedy, effectively expanding the comedic terrain enjoyed by American comedy fans in the 1980s and 1990s into darkly morbid, absurdist and naturalistic territories.”

“It’s almost like the ‘The Far Side’ was a rogue virus that accidentally got loose from its laboratory quarantine, went on to infect the cartoons around it on the comics page, and kept growing like a mutant strain — eventually achieving mass popularity and impacting comedy in other media ecosystems like television and film,” Soper said. 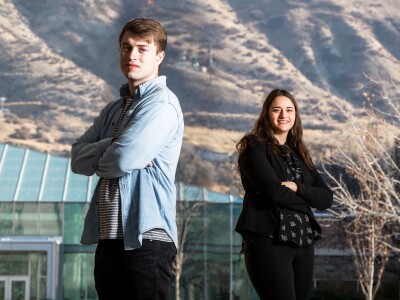