A Brigham Young University MRI expert worked with a UK-based team on the world’s largest health-imaging study, a massive undertaking to scan the brain of more than 100,000 people to find connections with developing diseases.

Electrical engineering professor Neal Bangerter, along with colleagues at Oxford University, developed the protocol that allows the UK Biobank research team to execute a series of six MRI scans on each participant in only 36 minutes.

“My job was to make sure we had the highest resolution possible and the best image quality possible in that small window of time,” said Bangerter, who got involved with the study while on sabbatical at Oxford.

The UK Biobank study is a long-term study of 500,000 British people aged 40 to 69 that aims to investigate how genetics and environmental conditions are related to developing diseases. The big-data study began in 2007 and will take samples and measures of the participants at various times over the next 25-plus years.

Several years into the study researchers decided they also wanted to add neuro-imaging data from a subset of participants. Knowing the enormous potential medical imaging has for early disease prediction, a grant was funded to enable imaging for 100,000 of the 500,000 volunteers

But there was a catch: After dissecting the costs and resources available*, the research team determined they only had 36 minutes to carry out MRI scans for each study participant. That’s where Bangerter’s skills were tapped.

“Traditionally, a set of scans like this would take up to an hour,” Bangerter said. “But in our case, each additional minute of scanning per subject would cost an additional 1 million pounds (approximately $1.22 million).”

Bangerter and colleagues Karla Miller and Stephen Smith consulted with other neuroimaging experts around the world, and traveled from Oxford to the pilot imaging facility in Manchester eight times by train to run pilots. In the end, they developed a system that included 33 minutes of scan time and 3 minutes of instruction for participants.

A paper detailing the MRI protocol and initial findings on the first 5,285 scans appeared recently in academic journal Nature Neuroscience. The high quality of the imaging data and large number of subjects enabled researchers to identify more than 30,000 significant associations between brain imaging measures and non-imaging measures, such as:

Researchers say the rich imaging addition to the UK Biobank study will provide scientists with insights into the causes of brain disease, provide markers with predictive power for therapeutic interventions and advance noninvasive imaging-based screening for preventative healthcare.
“BYU can benefit from this as well because I can transfer my knowledge to BYU where we can run some of these protocols,” Bangerter said. “It gives us, as an institution, the expertise and tools to compete with the best neuroimaging centers out there, from a research perspective.” 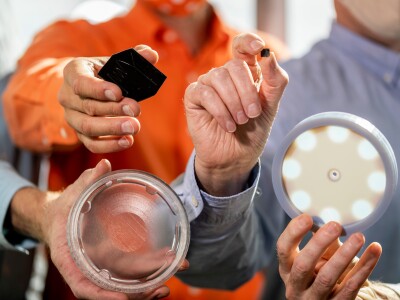 By Todd Hollingshead
Four BYU professors across four disciplines — molecular biology, chemistry, integrated optics and chemical processing — have created a method to extract superbugs from whole blood, prep them for testing and then provide a diagnosis all in under one hour.