In between the vertebrae of the human spine are 23 Oreo-sized, cartilage-filled discs that hold the vertebrae together and allow for spine movement.

While the discs are critical for movement, they can become the source of back pain when they degenerate or herniate – a major health problem that affects 85% of Americans and drains the U.S. economy to the tune of $100 billion every year.

A new biomedical device to surgically treat chronic back pain – an artificial spinal disc that duplicates the natural motion of the spine – has been licensed from Brigham Young University to a Utah-based company.

The BYU researchers report on the mechanism’s ability to facilitate natural spine movement in a study published in a forthcoming issue of the International Journal of Spine Surgery.

“Low back pain has been described as the most severe pain you can experience that won’t kill you,” said Bowden, a BYU biomechanics and spine expert. “This device has the potential to alleviate that pain and restore the natural motion of the spine – something current procedures can’t replicate.”

Currently, the most common surgical treatment for chronic low back pain is spinal fusion surgery. Fusion replaces the degenerative disc with bone in order to fuse the adjacent segments to prevent motion-generated pain.

Unfortunately, patient satisfaction with fusion surgery is less than 50 percent.

The solution researched by the BYU team, and now being developed by Crocker Spinal Technologies, consists of a compliant mechanism that facilitates natural spine movement and is aimed at restoring the function of a healthy spinal disc.

Compliant mechanisms are jointless, elastic structures that use flexibility to create movement. Examples include tweezers, fingernail clippers or a bow-and-arrow. Howell is a leading expert in compliant mechanism research.

“To mimic the response of the spine is very difficult because of the constrained space and the sophistication of the spine and its parts,” Howell said. “A compliant mechanism is more human-like, more natural, and the one we’ve created behaves like a healthy disc.”

Under Howell’s and Bowden’s tutelage, BYU student-engineers built prototypes, machine tested the disc and then tested the device in cadaveric spines. The test results show the artificial replacement disc behaves similarly to a healthy human disc.

“Putting it in a cadaver and having it do what we engineered it do was really rewarding,” Howell said. “It has a lot of promise for eventually making a difference in a lot of people’s lives.”

Halverson, who was lead author on the International Journal of Spine Surgery study, has since earned his Ph.D. from BYU and taken a position at Crocker Spinal Technologies, which will likely begin international sales distribution as early as next year.

“Fusion, which is the current standard of care for back pain, leaves a lot to be desired,” said Hawkes, president of Crocker Spinal Technologies. “Disc replacement is an emerging alternative to fusion that has the potential to make a significant difference in the lives of millions.

“BYU’s innovation is a radical step forward in the advancement of disc replacement technology. It is exciting to be a part of this effort and a delight to work with such talented, wonderful people,” he said. 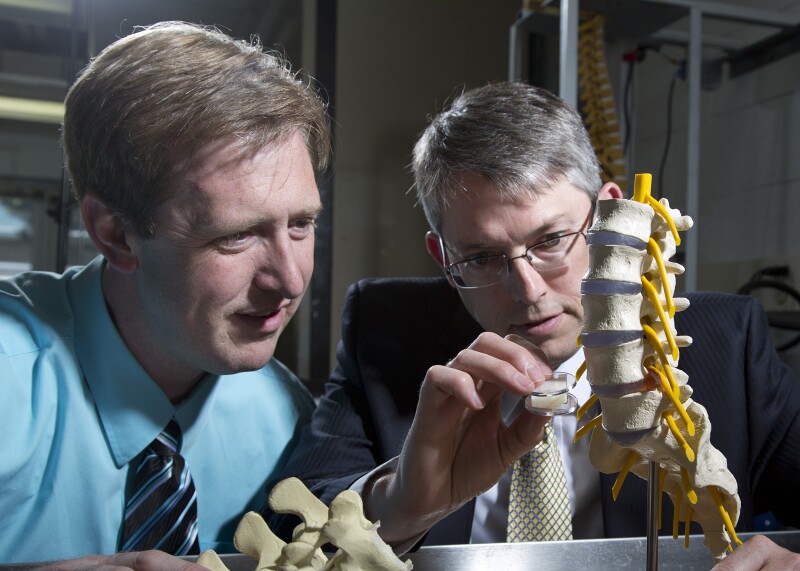 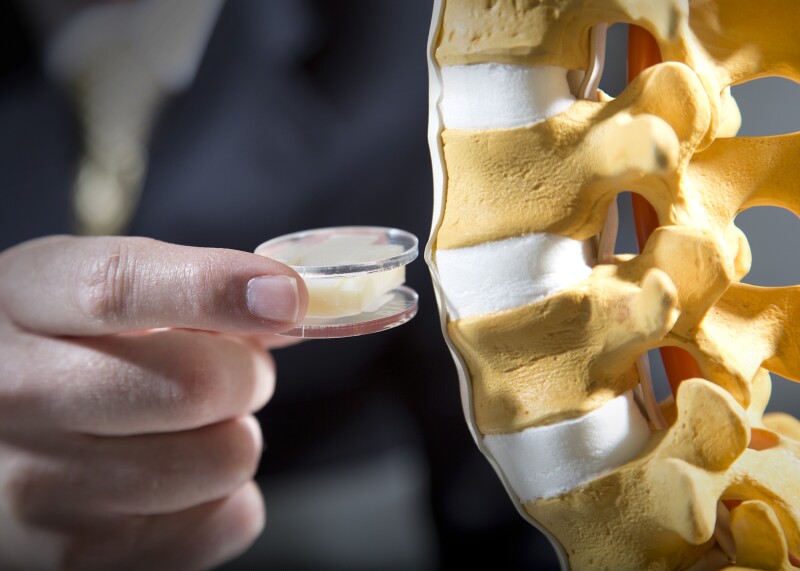 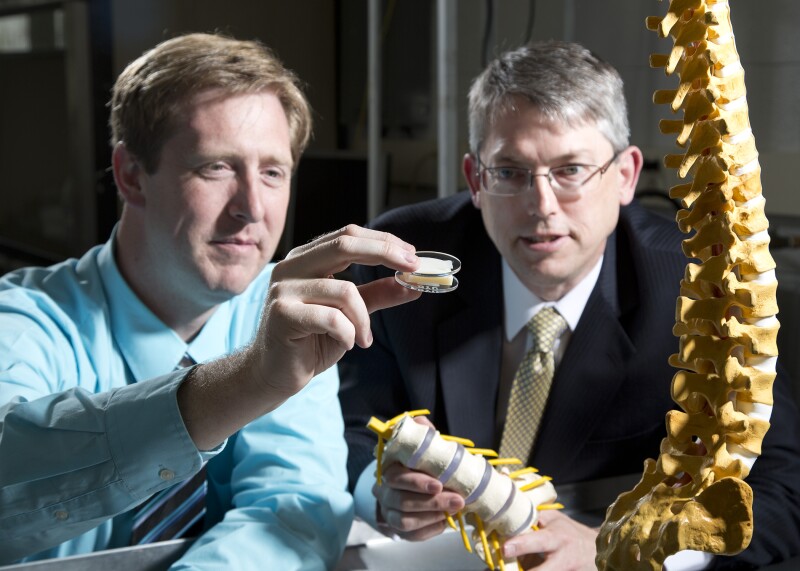 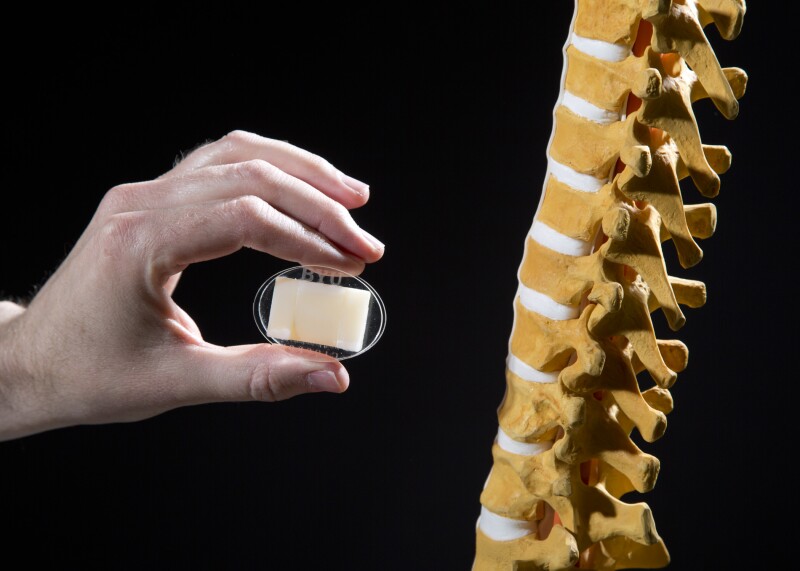 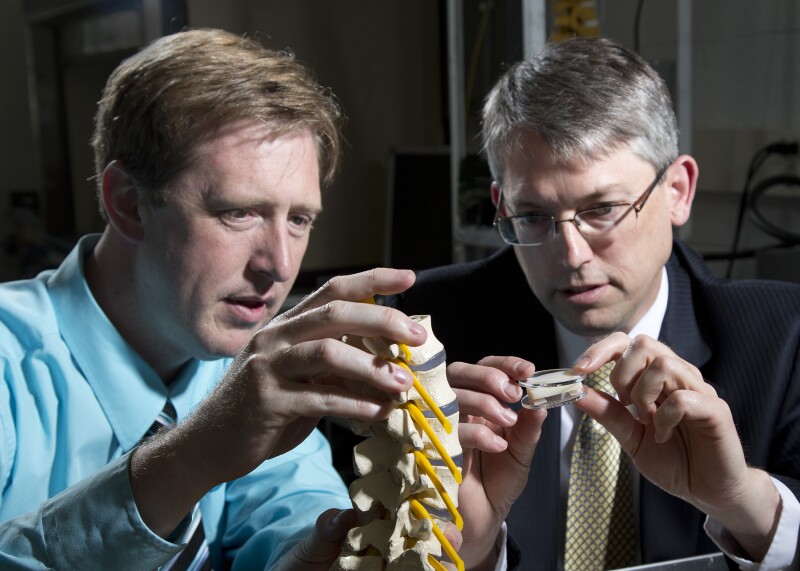 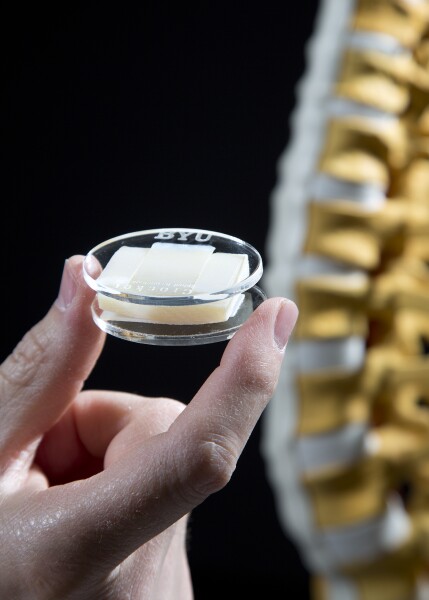 6 of 6
1206-12 134.jpg
Mark A. Philbrick/BYU Photo
1 of 6
Download this Gallery By clicking this link you agree to our Terms & Conditions
Media Contact: Todd Hollingshead
Tags
Engineering
Related Articles
data-content-type="article"