Brandon Sanderson has quickly become a standard name in the literary world of science fiction and fantasy.

The last five years alone have included two No. 1 spots on the New York Times best-seller list, currently for his latest release of Oathbringer and previously in 2014 for Words of Radiance. Sanderson earned a Hugo award in 2013 and landed two books included on Goodreads’ top 10 best fantasy books of the 21st century, surrounded by titles from J. K. Rowling and George R. R. Martin. Just to name a few.

Lately, Sanderson and Rowling seem to be taking turns at the top of Amazon’s most popular author list based on book sales.

But Sanderson’s growing legacy isn’t limited to his literary works. Once a year, he spends four months teaching a creative writing class at Brigham Young University as an adjunct faculty member. Like most creative writing classes, 80-90 percent of the course is focused on the craft, helping students improve their writing abilities. But the other 10-20 percent is what sets Sanderson apart from the rest — he talks business.

Sanderson helps his students understand what it takes to “make it” in the world of professional writing. Outside of covering the art of writing, the course includes writing queries (brief summaries of your book to send to agents), finding an agent, submitting to a publishing company, and managing taxes.

“I teach the class as if all of these students were to go on to be professional writers, just in case they do,” Sanderson said.

Sanderson’s class is a pipeline for young aspiring authors. He averages about two students for every class he teaches that end up becoming very successful professionals in the field. Here’s a small sampling:

Charlie Holmberg (’10) is the author of the Paper Magician series. Holmberg took Sanderson’s class for credit and then audited the class for a second round of mentored writing.

“The only reason I submitted my first query was because he made it a requirement for class,” Holmberg said. “That was a huge deal for me. I took a lot of creative writing classes at BYU, but Brandon was the only one who talked about the business of it.”

Disney currently owns the film rights to Holmberg’s trilogy and assigned the project to “Rogue One: A Star Wars Story” producer Allison Shearmur, who also worked as an executive producer on “The Hunger Games” and Disney’s live-action “Cinderella.”

Brian McClellan (’08), author of the Powder Mage trilogy, has sold more than 100,000 copies of the first book in the trilogy and just published his tenth book in his acclaimed Powder Mage Universe. The latest book, “Sins of Empire,” had a top 10 rank on Goodreads’ “Can’t Wait SciFi/Fiction” books. McClellan also took the class multiple times.

“When I first took the class, [Brandon] had just gone through that experience of getting a book sold for the first time,” McClellan said. “Watching that experience and then experiencing that for myself meant a lot to me. I saw where I wanted to be in X number of years and then I reached that point.”

Other students who have found solid footing in the industry include Janci Patterson (’08), Caitlin Sangster (’10), Dustin Steinacker (’13), and Steven Bohls (’13).

Current BYU student Sarah Keenan just finished her second go-round in Sanderson’s class this spring. She became a fan of Sanderson’s writing as a senior in high school and was excited for the chance to learn from one of her favorite authors.

“You get excited about writing when you read his books; he makes it looks easy.”

Keenan admits that in her own writing attempts she’s struggled to finish a book, but Sanderson’s class became empowering when he spoke about “discovery writers” and “outliners.” Discovery writers don’t know how their stories are going to end and they discover the story as they go. Outliners can’t successfully write without knowing the framework of their tale and the outlining keeps the writer from losing interest.

“Just listening to that made a world of difference,” Keenan said. “I realized I was an outliner and it motivated me to keep writing. I finished my first book this year.”

Sanderson admits he doesn’t know how much credit he truly can take when it comes to the success of his protégés. He too was part of a creative writing pipeline at BYU.

As a pupil of David Farland (Runelords), who also taught and inspired the creative minds of Brandon Mull (Fablehaven), James Dashner (The Maze Runner), Stephenie Meyer (Twilight) and Dan Wells (The Partials), Sanderson learned what it takes to be an author.

“It’s not like I sit down in front of the class and act as a fount of wisdom,” Sanderson said. “When I took the class from Dave Farland the biggest part was seeing a professional writer and thinking ‘Okay, this person does it as their real job.’ That’s why I keep teaching. It helps students to talk to someone who actually does it as a job.”

As Sanderson’s popularity increased, so did the number of students enrolling in his class. To keep up with demand, the English department has divided the class into a lecture portion to accommodate more students and a workshop portion for a limited number of creative writing students that Sanderson can mentor.

Students interested in the workshop section of the course are required to send in an application and the first few chapters of a novel they’ve already been working on. Sanderson only considers the first 65 applicants and then narrows the list down to 15 students who can enroll in the workshop.

The deadline to submit your application for the Winter 2018 workshop class is still a month out, but the applicant quota was met weeks ago. Fortunately, the lecture-only portion is open to anyone who wants to enroll (the university often has to reschedule a lecture hall big enough to fit all the interested students).

“I hope students learn that they really can do this,” Sanderson said. “Everyone talks about creative fields as if you were a fool for trying. And there’s an element of truth in that because it’s an uncertain thing, but all artistic fields are a lot more viable than we as a society pretend that they are.”

He also encourages aspiring writers beyond BYU with videos of his class lectures and discussions with other fellow authors on his podcast “Writing Excuses.” 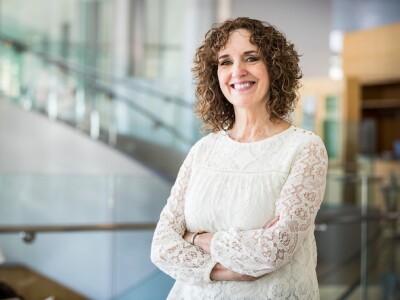 Intellect
When Your Brain Gets Transmogrified: BYU Professor Explores Mental Illness in Award-Winning Book Inspired by Calvin and Hobbes.
By Alec Sears
Martine Leavitt was reading Calvin and Hobbes one rainy day when the thought occurred to her that nowadays Calvin might be diagnosed with having schizophrenia.