Their “Candle-Powered Car Competition” limited competitors to only 10 candles for fuel and challenged them to create a vehicle that could travel 100 feet in 15 minutes. The event was organized by the BYU chapter of the American Society of Mechanical Engineers.

Only two cars were able to meet the challenge, each using just one candle. The larger of the two looked like it would slowly crawl to victory as it reached 1.5 feet in one minute, while the smaller car, which had been predicted to be the faster of the two, was still stuck at the starting line.

But after a minute the little car was able to get enough heat to zip approximately 40 feet, going so fast its candle blew out. The judges agreed to the relighting of the same candle, and the car went on to travel a whopping 166 feet in about 8 minutes.

“Definitely this time it was the hare that beat the tortoise,” said Thomas Ames, chapter president.

The prize for such a feat? Bragging rights and a brand new TI-89 graphing calculator.The winning car was by by Ezekiel Merriam, a juniormechanical engineering major from Lewiston, Idaho. He used an old toy electric car and unconventional pieces such as a wire coat hanger and used chewing gum.

The key to both cars’ success was a special piece of metal called a thermopile that transfers thermal energy into electrical energy when it is affected by temperature differences. It was positioned over the candle and under a bowl of ice cubes. Mark Davis, creator of the second winning car, discovered the device. 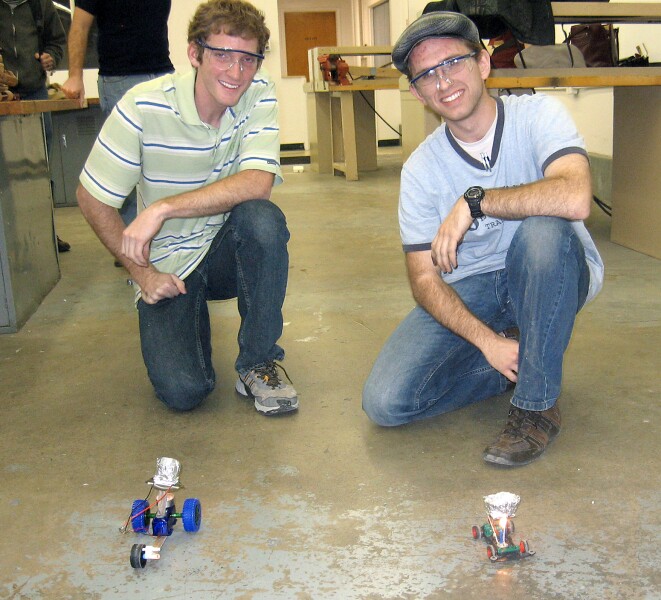 2 of 2
CandleBanner_1541.jpg
Kenny Crookston/BYU Photo
1 of 2
Download this Gallery By clicking this link you agree to our Terms & Conditions
Related Articles
data-content-type="article"