'Arrival' Oscar noms got you pumped about linguistics?

Long before the Oscar-nominated "Arrival" made analyzing languages look cool, Dirk Elzinga was quietly doing it for fun. Quietly being the operative word.

“At that time, it wasn’t the kind of thing you really shared,” said Elzinga, a BYU associate professor of linguistics. “Being a nerd in the early ’80s was not always a good thing.”

But reading The Lord of the Rings as a teenager, he was inspired by Tolkien’s ability to create a whole world, complete with its own languages. “The idea that somebody could just invent a language — it struck me what an achievement that was,” he said.

So Elzinga tried making up his own. “It wasn’t all that great,” he said, “but it gave me practice in thinking that way.”

With that early practice, coupled with years of study since, he’s become a bona fide languages guy — one whose appreciation for the complexity and intrigue of language has only intensified.

That complexity and intrigue now the stuff of Hollywood blockbusters, Elzinga found himself drawn to a particular "Arrival" scene:

Linguistics professor Louise Banks, played by Amy Adams, is working with military personnel to try to learn why a pair of extraterrestrials has come to earth. When her colleagues are frustrated that she can’t just ask them, Banks tries to convey how difficult the task is. “There are all these things you have to know to even be able to ask the question, and then we might not even understand the answer,” Elzinga said. “And in that scene, they broke it down the way a linguist would break it down.”

He would know. In his research Elzinga is breaking down and documenting a trio of endangered Native American languages — work that can in turn pave the way for applied linguists interested in preserving the languages. He spends much of his time exploring the phonetics and phonology of Shoshone, Goshute and Ute. But beyond vocabulary and sounds, Elzinga is drawn to a range of elements that make a language unique.

Getting “really nerdy with grammar,” he points out construction differences in two languages. Want to translate “I’m hurt” from English to German? You’re going to go with “It gives me pain.” Same goes with “I like this”: in German you’ll say “It pleases me.”

“So why would you do that?” he asked. “What does that mean? It’s not just about the sound of the words; it’s about the construction. A lot of people don’t really think about those things in language. But if you can look at them, it gets really fun.”

And more than fun: acknowledging and probing these kinds of questions can lead to an understanding that goes beyond language. “The more we know about how complex all varieties of language are, the less likely we may be to have knee-jerk reactions to the way people talk,” he said.

To help promote understanding, Elzinga requires students in his introductory linguistics courses to create a framework for their own language, complete with beginning lists of vocabulary, prefixes and suffixes, sentence examples and more. The assignment “confronts them with how really complicated languages are,” he said. 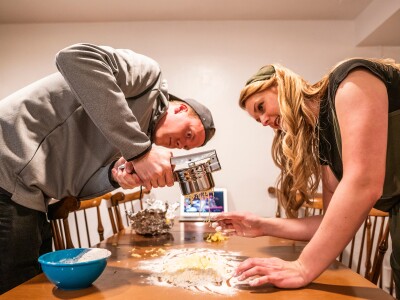