Jamie Jensen, associate professor in the College of Life Sciences, delivered Tuesday’s devotional address. She spoke about the battle between faith and science and about how diligent study of different truths can lead to conclusions about each.

In her distinction between science and religion, Jensen defined two ways to gain knowledge.

First, knowledge can come through a scientific process that gathers evidence from the world to find an explanation for a natural phenomenon.

“As scientists, we are in search of the truth, but we have to work with the tools and evidence available to us,” Jensen said. “So, we make hypotheses about the natural world and we test them by gathering data.”


To illustrate her point, Jensen described one of her class activities where students analyze an object in a bag without ever seeing the object itself. They make hypotheses about what could be inside the bag and then use the tools available to them to test that hypothesis: they feel inside the bag, take measurements and gather other data. They collaborate with other students and collectively decide on which conclusions are most supported by the data.

The second type of knowledge, Jensen said, is a faith-filled process of study and revelation to explain spiritual truths.

While in graduate school, Jensen had a professor challenge her about her belief in God and whether she could reconcile it with the science she was studying. She answered that she was a believer, and she had been convinced, again and again, by evidence.

“The evidence here is different,” Jensen said. “It is not tangible, measurable evidence by a scientific definition. But it is real evidence nonetheless. Spiritual tools take practice to develop, but they do exist, and you can develop them.”

Jensen’s professor said that scientific evidence proves there is no God. But Jensen stated that this is a misconception, and it is both common and counterproductive.

On the other side of the spectrum, Jensen shared that it is important to avoid a “God of the gaps.” This happens when an individual inserts God as an explanation for anything that science cannot explain. This is an issue because once science becomes advanced enough to explain a phenomenon previously attributed to supernatural powers, faith in God soon disappears. However, a faith that is not based upon a gap in understanding is less likely to waver.

“A paradigm shift must occur such that your belief in God is for an entirely different reason—not because He can explain the gaps in your current understanding but because He gives you spiritual understanding, and you have felt His presence in your life,” she said.

Jensen shared an experience that combined science and faith that blessed her life in the midst of deep trial and sorrow. While completing her master’s degree at BYU, she found out that she was pregnant. After nearly bleeding to death following the birth of her first child, she found out she has Asherman’s Syndrome, which causes excessive growth of scar tissue in the womb and causes extreme complications with pregnancy. While delivering her second child, Jensen again faced major complications and required serious medical attention. She discovered she wouldn’t be able to have more children, even though she had always wanted a bigger family. However, after finding a world-renowned surgeon, she was eventually able to have two more children.

“For whatever reason, the Lord saw it fit to bless me with a miracle,” she said. “But that miracle came about through the angels who work in medicine and the healing of my soul through much prayer and supplication.”

Faith and science came together to aid in the healing process, faith for the soul and science for the body. Without the scientific understanding of Asherman’s, bodily healing would not have been possible. Without the deep understanding of the truth of the gospel of Jesus Christ, spiritual healing would also not have been possible.

“Symbiosis is a term we use in biology to indicate an interaction between two different organisms living together in a dependent, and often beneficial, relationship,” Jensen said. “Likewise, faith and science should live symbiotically in our hearts and in our minds as we search for truth in our lives.”

Elder Quentin L. Cook, a member of the Quorum of the Twelve Apostles of The Church of Jesus Christ of Latter-day Saints, will deliver the devotional address on November 10, 2020, at 11:05 a.m.. 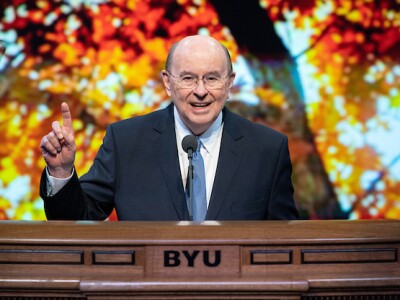 Faith
Devotional: Great expectations
By Kaylee Esplin
Elder Quentin L. Cook, a member of the Quorum of the Twelve Apostles of The Church of Jesus Christ of Latter-day Saints, delivered Tuesday’s devotional address. He spoke on the great expectations for the rising generation, saying that our Heavenly Parents and Jesus Christ have high hopes and aspirations for all of their children on the earth.
3 Min Read
overrideBackgroundColorOrImage= overrideTextColor= overrideTextAlignment= overrideCardHideSection=false overrideCardHideByline=true overrideCardHideDescription=false overridebuttonBgColor= overrideButtonText= overrideTextAlignment=
data-content-type="article" 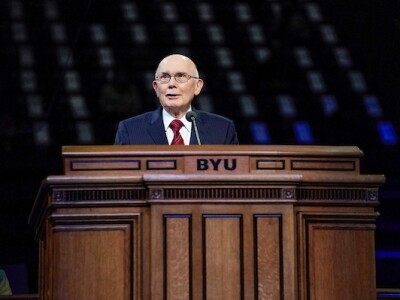