BYU Devotional: Ask of God — our solace, guide and stay


Ask of God: our solace

“Prayer is evidence that the Lord understands the storms of our life and the need for His children to have a safe place to retreat,” Sister Cordon said.

Sister Cordon shared a story of a time when prayer offered her solace. While on vacation, her young grandson stopped breathing and passed away. Sister Cordon’s daughter and family were devastated at the loss of the young child. After the funeral, Sister Cordon was assigned to minister to sick children at Primary Children’s Hospital. Given her recent heartache, the assignment seemed like a daunting task.

But Sister Cordon felt peace as she visited the children in the hospital. And she felt blessed with solace for her willingness to go.

“The true gift of prayer is knowing we are not alone when the world literally brings us to our knees,” she said.


Ask of God: our guide

“As we consistently go to Heavenly Father in prayer, we develop a relationship with Him that helps us see ourselves and Him in a clearer light,” Sister Cordon said. “He will guide us!”

While prayer may not offer as many results as Google, through prayer we are blessed with a clear mind and broadened understanding. Regardless of the topic, God wants to bless us.

Prayer isn’t always easy. Waiting for an answer requires patience, faith and trust that the Lord will guide us.

Sister Cordon shared a story from her childhood that demonstrates an important aspect of prayer. When she was four, she prayed before dinner, making sure to pray for each member of her family individually, except for her older brother. Her mother leaned over and said, “And bless Rodney,” to which four-year-old Sister Corden responded, “No, and you know why!”

While Sister Cordon doesn’t remember what her brother had done to warrant being left out of the prayer, she used the anecdote as a way to point out that sometimes a prayer of gratitude can be offered in the midst of a trial in addition to after the storm has calmed.

“If we hope to gain the full power of this portion of prayer, we may need to open our hearts more fully,” she said.


Ask of God: our stay

“With promised guidance and proven solace, you would think we would ask of God continually,” Sister Cordon said. “He will be our stay — our steadfast and constant source of strength, respite and revelation if we will choose to walk with Him, yet we sometimes cease to pray.”

Sister Corden told the story of Jared and his brother in the Book of Mormon. They pray to God for guidance and are told where they should go. The Lord promised to bless them because of their diligence. As they made the journey, Jared and his brother were helped again and again. They were protected for years and in his comfort, the brother of Jared stopped praying to the Lord. After realizing his mistake and repenting, he was able to mend that relationship and once again receive help and strength.

“The example of the brother of Jared brings hope because he repented and was again guided by the Lord,” she said. “Our Heavenly Father and our Savior Jesus Christ love us, even if we’ve spent four years on the seashore and never called home.”

Through prayer, we are given the opportunity to understand who we are and how much we are loved. We will receive guidance in the direction our life should go and how we can bless those around us.

“Ask of God. Continue to make prayer a constant in your life — intentional, purposeful, heartfelt prayer. Allow it to be your solace, guide and stay,” Sister Cordon said.


Next Devotional: Elder Terence M. Vinson, Presidency of the Seventy

Elder Terence M. Vinson, a member of the Presidency of the Seventy of The Church of Jesus Christ of Latter-day Saints, will deliver the BYU Devotional on Tuesday, February 11, at 11:05 a.m. in the Marriott Center. 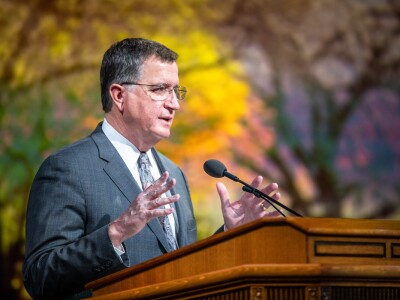