President Kevin J Worthen and Sister Peggy S. Worthen welcomed students back to campus with the first devotional of the semester. They spoke about maintaining faith and hope during challenging times.

Sister Worthen pointed to the Old Testament story of Caleb as an example of having courage while facing a challenge.

The Lord commanded Moses to choose twelve men to search the land of Canaan. On their journey, they found fruitful land and returned to tell Moses. Ten of the twelve spies didn’t want to tell Moses the truth because the people in Canaan were strong and they were afraid of the potential conflict. Caleb and Joshua, two faithful spies, tried to convince Moses and his people that they had no reason to fear because the Lord was with them. The Lord promised Caleb that because of his faith, he would be able to possess the fruitful land, and many years later he did.

During this difficult but extraordinary semester, there will undoubtedly be challenges that can cause similar fear.

“If we, like Caleb, trust the Lord, we can meet these challenges with faith, courage and even enthusiasm,” Sister Worthen said. “We can say, ‘give me that Stats 121 mountain’ or that ‘pandemic mountain,’ or even that ‘awkward roommate mountain.’”

She offered suggestions of four things to do in order to develop Caleb-like faith and courage.

1. Pray to Heavenly Father.
2. Study your scriptures daily.
3. Look for opportunities to serve.
4. Don’t be afraid to share your difficult and extraordinary experiences with others.

“I have great faith in you,” Sister Worthen said. “More importantly, God has great faith in you. You have accomplished so much already in your young lives. But you can do more, much more if you face your challenges with Caleb-like faith, courage and optimism.”

President Worthen began his remarks by telling the Greek myth of Pandora, an ancient attempt to answer the question of why there are problems and evils in the world.

Zeus wanted revenge on Prometheus for giving fire to the humans, explained President Worthen. In one version of the story, Zeus creates Pandora and gifts her to Prometheus’s brother, Epimetheus. Pandora brings with her a jar that contains what one ancient poet called “countless plagues.” Prometheus warned his brother not to accept any gifts from Zeus, but Epimetheus ignored him and accepted Pandora, who immediately opened the box, scattering evils throughout the world.

“This story – and the use of the term 'Pandora’s box' to refer to a multitude of problems and evils – is widely known today,” President Worthen said. “What is less well known is that, according to the earliest written record of the myth, there was one item in Pandora’s jar or box that did not escape. That item was hope.”

Scholars have debated for centuries why hope remained in the box. Some believe that Zeus trapped hope out of anger and didn’t want humans to be able to access hope, while others believe that hope was kept in the jar so that humans would always have the ability to hope.

President Worthen said that one reason why our understanding of hope is less developed than other gospel concepts is that hope has many different meanings. In some instances, it is a weak form of positive thinking, a hesitant confession of optimism. In others, it takes on an important role of steadying and purifying.

“One step in better understanding hope is to focus on the gospel-centered concept of hope and not the more wishy-washy, weak form of Pollyannaish positive thinking to which the world sometimes limits its meaning,” President Worthen said.

There are two types of hope according to President Worthen. The first, which President Worthen called “nascent hope,” is the kind of hope that comes before faith, something that is beginning to form or grow. Nascent hope comes through agency, demonstrating a desire to believe.

The second type of hope is coupled with faith and assurance in Christ and His capabilities. This more powerful and enduring type of hope comes when nascent hope meets faith in Christ.

“While we ultimately want to develop the more excellent hope that comes from exercising faith in Christ, we should not ignore or underestimate the power of nascent hope – such hope is important both because it is the indispensable first step in the process and because, at times, it is all we can muster,” he said.

President Worthen concluded by sharing four of his hopes for the students beginning the new, unique school year.

Next Devotional: Elder James B. Martino

Elder James B. Martino will deliver the devotional on Tuesday, Sept. 15, 2020, at 11:05 a.m. The devotional will be broadcast only; there will be no attendance in the Marriott Center.

His remarks will be broadcast live on BYUtv, BYUtv.org, KBYU-TV 11, Classical 89 FM and BYUradio. 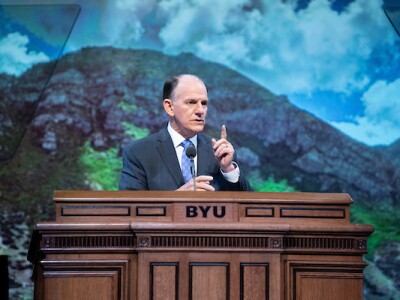