Six times a year, BYU invites an expert in his or her field to deliver a forum address on campus. This academic year, these illustrious speakers will address the campus community on a variety of topics around the central theme of “What It Means to Be Educated."

Forum lectures are held on Tuesdays at 11:05 a.m. Information on the mode of delivery of each forum will be announced at a later date.

Melody Barnes
September 29, 2020
Lawyer and political advisor Melody Barnes worked as an aide and chief counsel to Senator Edward "Ted" Kennedy on the Senate Judiciary Committee and later as the director of the Domestic Policy Council under President Barack Obama. Barnes has assumed roles at the Aspen Institute and NYU, and is now at the University of Virginia, where she teaches law and is co-director of the Democracy Initiative.

Eboo Patel
October 20, 2020
American Ismaili Eboo Patel is the founder and president of Interfaith Youth Core, a Chicago-based international nonprofit that aims to promote interfaith cooperation. Patel was also a member of President Barack Obama's inaugural Advisory Council on Faith-based Neighborhood Partnerships and served on the Department of Homeland Security’s Faith-based Security Advisory Council. He earned a doctorate in sociology of religion from Oxford University and is the author of several books, the most recent being Out of Many Faiths: Religious Diversity and the American Promise.

Ziauddin Yousafzai
November 17, 2020
Educator, human rights campaigner and social activist Ziauddin Yousafzai is from Pakistan. After graduating with an MA in English, he established a successful school in his native Swat Valley. There, at great personal risk among grave political violence, he peacefully resisted the Taliban’s efforts to shut down schools and kept open his own school. Yousafzai speaks on national and international media resisting the Taliban’s atrocities and on promoting children’s rights –especially girls’ rights – to education and peace through active pacifism. His courage and passion have inspired many people, including his daughter, Malala Yousafzai, to join him in standing up for human rights.

David Epstein
January 26, 2021
Investigative reporter David Epstein is the author of Range: Why Generalists Triumph in a Specialized World. In it, Epstein raises issues that are central to our discussions of the purposes and processes of general education. One reviewer wrote that the book “will force you to rethink the nature of learning, thinking, and being, and reconsider what you thought you knew about optimal education and career paths.” Epstein is a graduate of Columbia University, where he earned a bachelor's degree in environmental science and astronomy and master's degrees in environmental science and journalism.

Dambisa Moyo
February 23, 2021
A Zambian-born international economist and author who analyzes the macroeconomy and global affairs, Dambisa Felicia Moyo currently serves on the boards of Barclays Bank, the financial services group, Seagate Technology, Chevron Corporation, the global miner Barrick Gold and the 3M Company. She worked for two years at the World Bank and eight years at Goldman Sachs before becoming an author and international public speaker. She has written four New York Times bestselling books, with the most recent, “Edge of Chaos: Why Democracy Is Failing to Deliver Economic Growth – and How to Fix It,” published in 2018.

Drew Faust
March 30, 2021
An American historian and the first woman to serve as the president of Harvard University, Drew Faust was ranked by Forbes as the 33rd most powerful woman in the world in 2014. She is the author of six books, including Mothers of Invention: Women of the Slaveholding South in the American Civil War, for which she won both the Francis Parkman Prize from the Society of American Historians and the Avery O. Craven Award from the Organization of American Historians. Faust retired as president of Harvard College in 2018 and retains her title as a professor of history there. 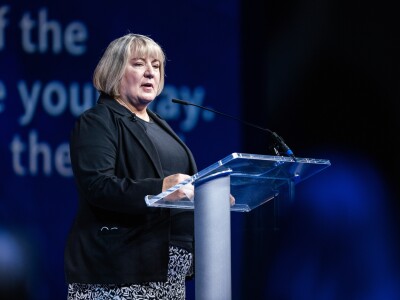