Miniature airplanes - they're about as wide as this sentence is long.

BYU tied for first place with the University of Florida in the competition, held in Payson.

With the much-publicized participation of flying drones in the war in Afghanistan, the scientific and defense communities, as well as the public they serve, are even more interested in high-performance, remote-controlled airplanes. Miniature airplanes may one day be part of the next generation of unmanned surveillance technology.

"I'm always surprised at the size of the planes every year. They just get smaller and smaller," says W. Jerry Bowman, a professor of mechanical engineering who advises BYU's student teams. "I think it's safe to say that we will have the world's smallest airplane at the competition."

More than 100 students from BYU, Cornell, Vanderbilt, Penn State, Cal Poly, Lehigh, the University of Florida, the University of Arizona and universities in France, Germany and Korea competed in the event, which was hosted by BYU at the Emerald Turf Sod Farm.

Mary Rees, a civil engineering senior from Coalville, Utah, was one of more than 30 BYU students who participated in this year's competition. Although she spent many hours this semester analyzing wings to make her team's plane soar, she still finds it hard to believe that something so small can fly.

"It seems like they should just drop out of the air," says Rees, who plans to work in structural aeronautics after graduation. "This project has been good preparation for the future. It's made engineering fun as I've learned why airplanes stay in the air and why they fall."

Three BYU teams - two comprised of seniors and another all-volunteer team - demonstrated their engineering know-how at the competition. The seniors built the planes as part of a required design project class. BYU engineering professor Paul Eastman serves as a second advisor to the teams.

Kendall Fowkes, a graduate student in mechanical engineering from Coalinga, Calif., led the volunteer team, which was divided into groups focused on the mini-plane's airframe, propulsion and components. Fowkes' responsibility was to use computer design programs to optimally fit lightweight components into the smallest possible airframe.

"Collecting data, researching proper components, testing in the wind tunnel - all of this will help us make sure the plane is as small as we can get it," says Fowkes, who considers the project the most exciting thing he can think of doing in his career right now. "This is a cutting-edge technology with lots of useful applications. I absolutely love this."

Someday, soldiers may pull planes from packs and use them to survey the battlefield for threats, says Fowkes.

Aside from military surveillance, Bowman says miniature planes could also be used in civilian applications. For example, police could use them to track fleeing criminals, or journalists could enter difficult-to-access areas to obtain exclusive live footage. Another scenario might have search-and-rescue teams pilot a plane into a tight spot to better assess an emergency situation.

"Video capability is really only the surface," says Bowman. "Attach a microphone or a chemical sensor to the plane and you can collect many other types of information."

Despite their diminutive nature, the planes come with a substantial price tag. A plane can cost up to $1,500 to build, says Bowman, a price limit set by competition rules. Most of the cost comes from the tiny video camera that transmits images to a receiver on the ground. The camera also helps the pilot navigate the skies.

"When the airplane gets out of sight - which happens pretty quickly - we have to fly it using the live video screen," says Bowman.

"Flying these things is a matter of experience and reflexes," says Christensen, from Bishop, Calif., who is considering a career in aviation. "Your body gets used to flying by instinct. These planes fly so fast that it almost has to happen without any thought at all."

Philip Jimenez, a senior in mechanical engineering from Germantown, Tenn., got interested in the project after a summer internship doing computational flow dynamics for a company that builds commercial and military aircraft engines.

"I'd flown radio-controlled airplanes as a kid, but this is the first time I'd worked with a plane so small," says Jimenez, who isn't against engaging in shameless braggadocio. "The University of Florida won last year, so our team's mission statement this year was 'Beat Florida.' We are ready, and we are going to annihilate the competition."

But the title of champion of the skies, which comes with a $4,000 purse, is up for grabs, says Bowman.

"A good team can build a plane in a couple of hours, so the dynamics of the competition can change very quickly," says Bowman. "We fly the planes for half the day, so if a team sees it can't win because its plane is too large, they'll try to build one on the spot that can."

The competition's shifting nature provides students with a stage to creatively demonstrate an immediate knowledge of aeronautics and design.

"The mini-airplane community is very friendly," says Bowman. "There's a lot of sharing of information between schools. Whenever we come upon a good concept we get the word out. Other schools do the same. On the day of competition you'll see opposing teams helping each other out. For example, if a part breaks, someone will usually loan you a backup."

But don't mistake friendliness for flimsiness. Students come to win, something Bowman thought BYU had a good chance of doing this year.

"We've got a couple of things going for us - first, we've built some really small planes that have done well in tests. Second, we feel like we have a slight home-air advantage." 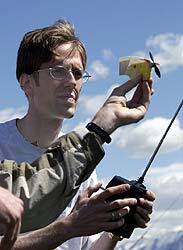 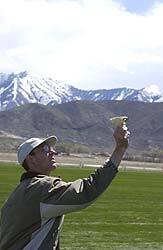 2 of 2
miniairplane3.jpg
Mark A. Philbrick/BYU Photo
1 of 2
Download this Gallery By clicking this link you agree to our Terms & Conditions
Related Articles
data-content-type="article"