The award-winning marionette theatre Tanglewood Marionettes will perform two plays, “Perseus and Medusa” and “The Dragon King,” at Brigham Young University Thursday through Saturday, Sept. 15-17, in the Pardoe Theatre.

Tickets are $6 for children age 4-11 and $8 for adults. Those interested will be able to attend both plays. “Perseus and Medusa,” will be performed Thursday at 7 p.m. and Saturday at 2 p.m. “The Dragon King,” will be performed twice on Friday at 10 a.m. and 7 p.m. and once on Saturday at 11 a.m.  A question-and-answer session will follow each performance.  For tickets, contact the Fine Arts Ticket Office at (801) 422-4322 or byuarts.com/tickets.

Founded in 1993 by Anne Ware and Peter Schaefer, Tanglewood Marionettes is a nationally touring theatre based in New England. The company’s repertoire, including what they will perform at BYU, consists of classic tales performed with three-foot marionettes by skilled puppeteers.

Tanglewood Marionettes has been featured many times at the Puppeteers of America National Festival and have received two Citations for Excellence in the Art of Puppetry.

The first show, “Perseus and Medusa,” is a puppet portrayal of the ancient Greek myth. The audience will live through the fatherless hero Perseus as he travels from the Garden of Hesperides to the Underworld on his quest to defeat Medusa without getting turned to stone.

The Friday play, “The Dragon King,” is Tanglewood Marionettes’ newest production. Based on Chinese folklore, the story  follows a wise grandmother’s journey to the bottom of the sea seeking an audience with the Dragon King, who has left the land above to waste away at the hands of a terrible drought.

For more information about this performance, contact Ken Crossley at (801) 422-9348 or ken_crossley@byu.edu. To learn about the Tanglewood Marionettes, visit their website at tanglewoodmarionettes.com. 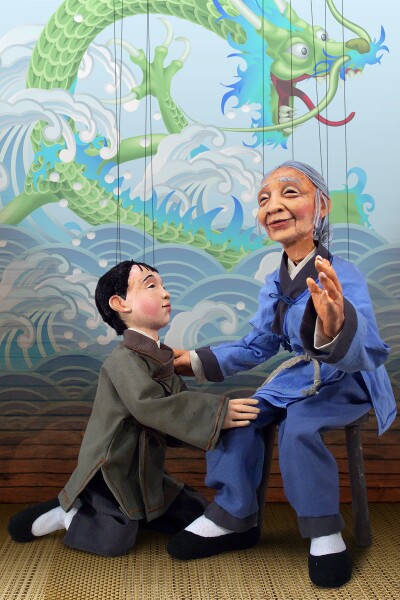