Summer Projects: BYU's Divine Comedy Spent the Summer Having Fun, Now They Are Ready for Business. Sort of.

There are two things probably every person knows about Divine Comedy: it?s funny and clean. Sure, anyone at BYU and any BYU experience is fair game for a mocking. But it?s tasteful humor.

However, when the end of fall and winter semester shows wrap up, the humor doesn?t end. During the summer, when the Divine Comedy team has some free time, they often lend their skills to come up with clever ways to help campus entities with their marketing efforts.

For example, this summer BYU Treasury?s John Leatherwood asked them to create a music video to show the benefits of using Cougar Cash. Creating funny skits is clearly what they do, but making a video is a good challenge for the group.

?Making a video is like making a regular sketch but 100 times harder,? said Matthew Moen, a Divine Comedy cast member.

Working closely with Leatherwood and the BYU Treasury staff, the group started by identifying a song to set the right mood for the video. Then they came up with new lyrics to tell the story of Cougar Cash. After more than 10 rounds of revisions to the lyrics, the song was recorded and the storyboarding of the scenes begins.

?Music videos are as much about telling an interesting visual story as they are about listening to the music,? said Sarah Thompson, a Divine Comedy cast member. ?If either the visual or the music isn?t funny then the video is a failure.?

Next comes the filming. For the Cougar Cash video, the group filmed all the shots within a week, including a coordinated dance scene with over 60 fans.

?The video went through something like three or four versions before we got it to something that we liked,? said Moen. ?I think that?s pretty good compared to most of our projects.?

In addition to the Cougar Cash video, which was posted last weekend, the cast also spent the summer working on projects for the Harold B. Lee Library, the Honor Code Office and the Office of Information Technology (OIT).

?The OIT video was just fun,? said Moen. ?They basically said, ?Do something that will make people laugh.? So we created an IT super hero.

Adding New Talent: You Could Join the Family

Now that the fall semester is started, the group is looking forward to bringing in new talent to be part of their family.

Every year in September, the group holds auditions for a few open slots in the cast to search for fresh, new talent. Over 100 students will try out, but only 15 of the most promising performers are invited for callbacks. After a day of sketch writing and improvisational games, the finalists give a capstone performance before a live audience. The returning cast members then spend the night deciding who will become part of the Divine Comedy family.

Throughout fall and winter semesters, the group works closely with Theatre and Media Arts advisors George Nelson and Elizabeth Funk to explore and practice the craft of comedy sketch writing and performing.

The writing and editing is a rigorous process. In a process similar to sketch comedy showSaturday Night Live, the team works together to cultivate ideas and generate viable scripts. Each member comes up with sketch ideas they pitch to the rest of the group for feedback and improvements. The writer then takes the suggestions and does a rewrite to flesh out the characters and tighten the plot twists.

In the end, all the work of writing and editing is certainly worth it. This process enables the creation of beloved characters like the Shoulder Angel of Studio C fame and brand new worlds like Annie: the Star Wars musical.

?This is the greatest thing you can do on campus but it is also hard,? said Thompson. ?We get pushed to our limits?but after every practice and every show we are all grateful we did it.?

Part of the process the group goes through is to learn how to recognize the difference between ideas that can be turned into hilarious sketches and the ones that will flop.

?Laughs don?t lie,? said Thompson. ?Even though it hurts to see a sketch that I?ve worked on get axed at the last moment, I only want the best material in the show.?

Of the 40 or so sketches that group members create only about 25 make it through to the free tech rehearsal, which happens the Tuesday night before the actual show. The rehearsal audience is encouraged to give feedback and rate each sketch. From these comments and ratings only 15 sketches are chosen to go into the paid show along with one longer ?headliner? sketch that often parodies a popular musical, film or TV series.

?Our process is brutal, but when people come to our shows they get a highly concentrated portion of funny,? said Moen.

Summer Projects: BYU's Divine Comedy Spent the Summer Having Fun, Now They Are Ready for Business. Sort of. 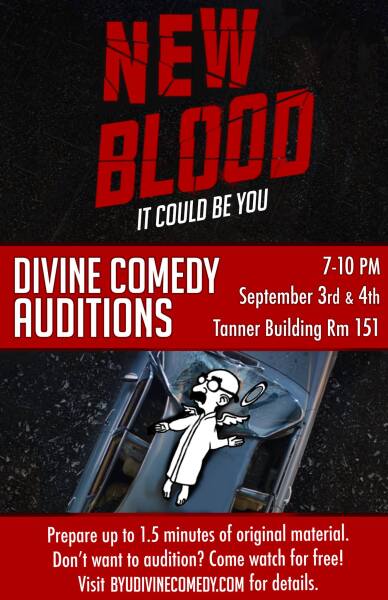