Not always best being biggest fish in the stream, BYU study finds

Prof and undergrads fend off red ants, petty thieves and the threat of snakes and crocs

Bigger isn’t always better. Especially when you’re a little tropical fish trying to escape notice of the toothy predator.
That’s one of the conclusions of a BYU research team that overcame red ant attacks and the theft of their precious lab notebook to publish an important study about how fish adapt to their environment in the August issue of their field’s top journal, Ecology.

“I’m fascinated by the engine that generates new biodiversity,” said lead author Jerry Johnson, assistant professor of biology. “How do we end up getting all the things we see in the world, what’s that mechanism? Ranging all the way from the development of unique traits that deal with reproduction or body shape or behavior or even, at the highest level, how new species form.”

In this study, Johnson and his students wanted to see how fish change when they share space with predators. So they used big nets and kiddie pools to scrutinize a natural experiment thousands of years old. They found two separate colonies of the same species of Costa Rican fish that’s a cousin to guppies and swordtails – one group lived amidst a predator species that look like bass, while the other group swam fear-free in a stream the predator couldn’t reach.

It turns out that the bigger the fish get, the worse their chances of surviving, because they present a more appealing meal for the predator. As you might suspect, the predator causes a much higher death rate in the group that shares its stream. But amazingly, both groups in the experiment have the same population growth. That means fish in the predator habitat have adapted their patterns of reproduction to maintain their numbers – they mature faster and bear more young at a younger age than those in the other group.

Making such precise conclusions required a ton of work.

Johnson’s team needed to count, measure, and mark virtually every one of the 500 to 1,000 fish in each of the streams they studied. They did it by dragging big nets through each pool – about the size of a large office -- 20 or 30 times. The captured fish went into a kiddie pool dusted with anesthetic. Then each sleepy fish was injected with a dye at a particular spot that was meticulously recorded in a lab notebook. That was necessary because the next week, the team returned and did it all over again, so they could see which fish were missing and presumed eaten by the predator. (They used proven statistical models to account for the fish they may have simply missed with their net). They returned for five weeks, long enough to follow the fish through their four-week reproductive cycle.

Of the 12 hour days, Johnson’s undergraduate helpers talk more about having fun than the hard work. Recent graduate Cory Heizenrader fondly recalls Johnson tearing his shirt off and jumping into the water after discovering himself covered in red ants.

“Every day in the field with Dr. Johnson and our team was funny,” he said, who was once relieved to find that the large object brushing against his leg wasn’t a crocodile but rather a large turtle. “My field research with Dr. Johnson helped me understand science more than any other experience I had at BYU. It also helped me put in perspective what it meant to be a student at a terrific university.”

Finally, the meticulous data gathering was complete and the team packed up its gear for the trip home. Johnson stopped at a pay phone in a town square, and during the minutes he was away from the car, petty thieves broke a window and grabbed his backpack. His stomach tightened when he heard locals shouting at the thieves as they ran away, because all their records were in an orange notebook in the backpack. Police later caught the robbers, mentioned in the acknowledgements of the journal article by their street names of Tilapia and Brinca Brinca. But alas, the precious notebook was never recovered. Johnson had to return the next year and repeat the entire process.

But persistence paid off when the resulting paper was accepted by Ecology.

“It’s indeed the most prestigious journal in the discipline of ecology,” said Helen Rodd, associate professor of ecology and evolutionary biology at the University of Toronto, who was not affiliated with the research. “This is an important and interesting contribution to the field because he was able to document the advantages of different reproductive traits.”

Johnson’s paper notes that the optimal age for reproduction was different between the two groups. “We tied this evolved difference back to the demographics -- trying to understand which age group contributes most to the persistence of the population,” he said.

That type of understanding is valuable information for conservation biologists studying, say, Columbia River salmon. Those scientists are trying to decide whether to invest resources in protecting juveniles floating down the river or middle-aged adults in the ocean.

Johnson’s research was supported by a Mentoring Environment Grant from BYU. His coauthor on the Ecology paper is J. Jaime Zuniga-Vega of the Universidad Nacional Autonoma de Mexico.

Not always best being biggest fish in the stream, BYU study finds 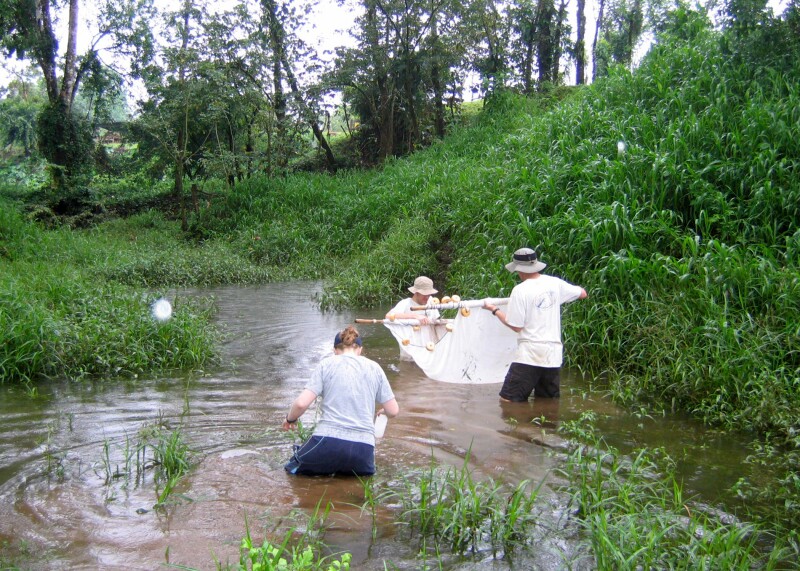 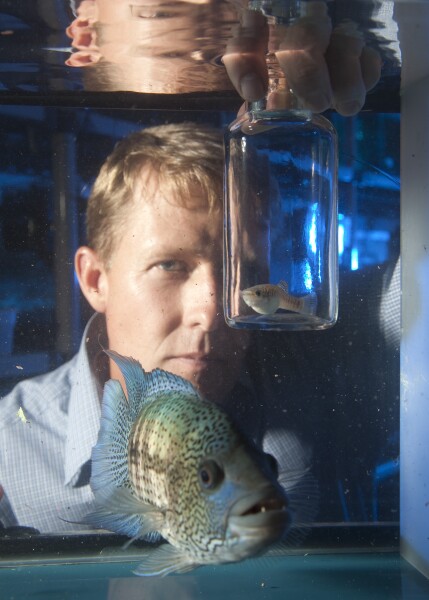 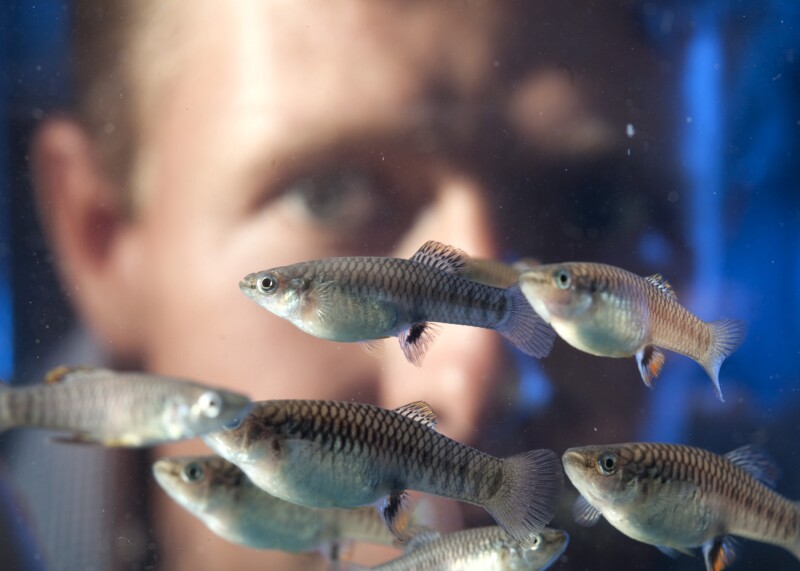 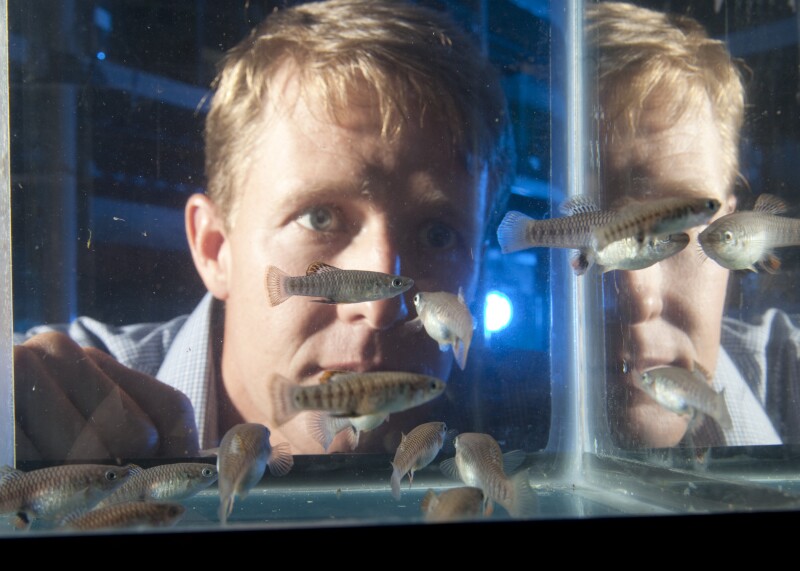 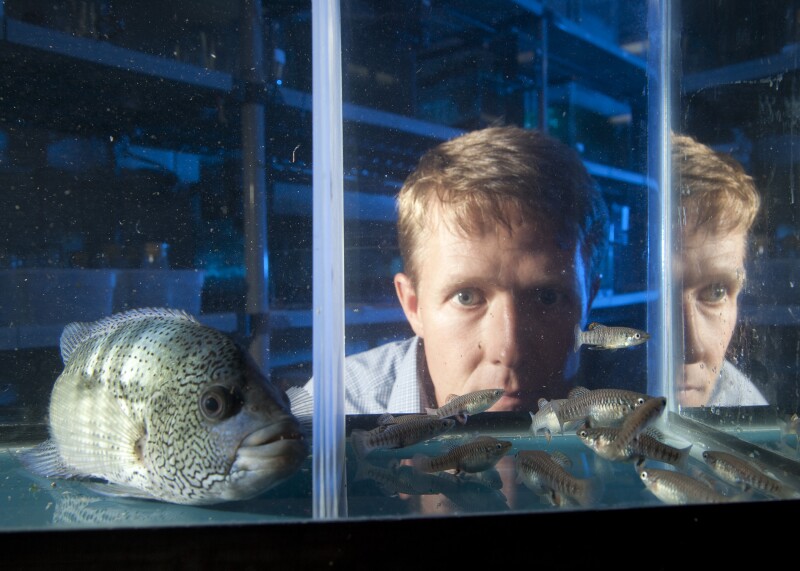 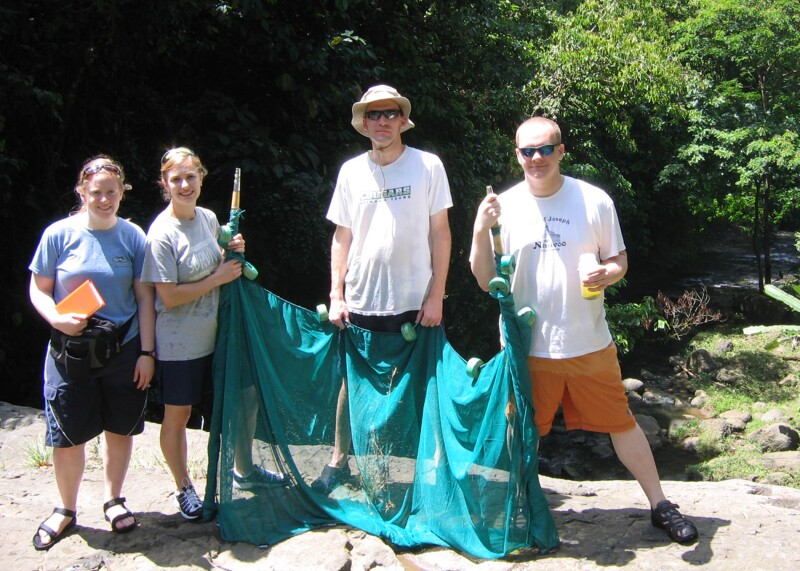 6 of 6
blue net.jpg
Mark A. Philbrick/BYU Photo
1 of 6
Download this Gallery By clicking this link you agree to our Terms & Conditions
Related Articles
data-content-type="article"