Writer: Roger LaytonBesides Brigham Young, there is probably no other person whose name is as connected to Brigham Young University than Karl G. Maeser. A new exhibit opening on campus will explore this university founder’s life, from his beginnings in Germany to his teaching legacy, which is still felt at BYU today.

“Maeser’s vision for education not only influenced BYU, but laid the foundation for other universities and even public schools throughout the western United States,” said BYU McKay School of Education Associate Professor A. LeGrand “Buddy” Richards, who is one of the curators of the exhibit. “Seven of the academies he helped found are now institutions of higher education. He also proposed the initial plan for the LDS Church Educational System that serves hundreds of thousands of young people today throughout the world.”

Richards worked with BYU Harold B. Lee Library Senior Librarian Rachel L. Wadham on this exhibit, which opens this month at BYU’s Education in Zion Gallery in the Joseph F. Smith Building. The BYU Museum of Peoples and Cultures’ Director Paul Stavast and Raymond Griffin designed and installed the exhibition. Griffin is a senior from Mapleton, UT, majoring in design with an emphasis in photography.

It’s fitting that an exhibition about a person who dedicated his life to working with young people was designed and installed largely by students. The process of creating the exhibition had a big impact on Griffin.

“There is a lot to learn from Maeser,” Griffin said. “He was a man of exceptional vision and instilled that vision in his students through the way he lived his life and by the lessons he taught. Through his teachings, Maeser helped all of those around him learn to see life as one great object lesson.”

Helping others to learn and seeing the meaning in the world around us is what Maeser would want viewers to take away from the exhibit, Griffin said.

“As people come to this exhibit they will get a glimpse into seeing things as Maeser saw them and learn how to see things from a symbolic point of view,” he said. “Everything in nature, from the mountains, trees, weather and plants, to the things of man such as ships and even furniture, can contain a great deal of symbolism if viewed with the right mindset.”

Maeser believed students should be active participants in their own education, should have direct experiences in the world and should learn with their head, heart and hands. Of course, Maeser’s vision of student learning has been a big part of the creation of this exhibit. Griffin said this hands-on learning has been invaluable, further proof of Maser’s vision living on.

“Working on this exhibition has made me more excited to start working on other exhibitions and apply the things I have learned,” Griffin said. “This exhibition gave me a great opportunity to learn how to turn 2D concepts into 3D spaces that others can step into and experience for themselves. Upon graduating I would love to work with museums and galleries in designing exhibitions. This exhibition has been an incredible stepping stone for me in my quest to be an exhibit designer.”

Griffin hopes all visitors to the exhibit will better understand Maeser and how to take his experiences and teach future generations of students.

“His vision for education is as current today as it was when he taught here 140 years ago,” Griffin said. “The closer we get to our past, the better we can understand our present and the clearer we can create a vision for our future.”

The Karl G. Maeser exhibit is open through November 2017. There will be an opening event for the exhibit on Wednesday, Sept. 28, from 4 to 7 p.m., in the Education in Zion Gallery in the Joseph F. Smith Building at BYU. The event, which will include live music, entertainment and food, is free and open to the public. 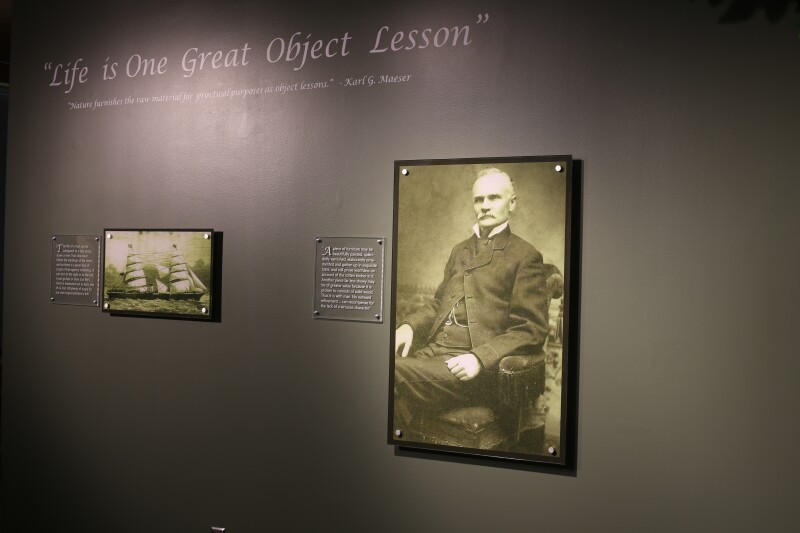 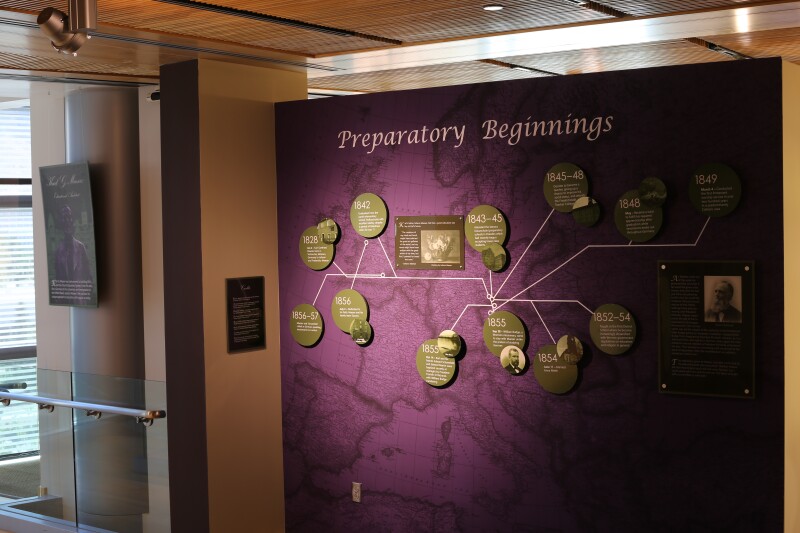 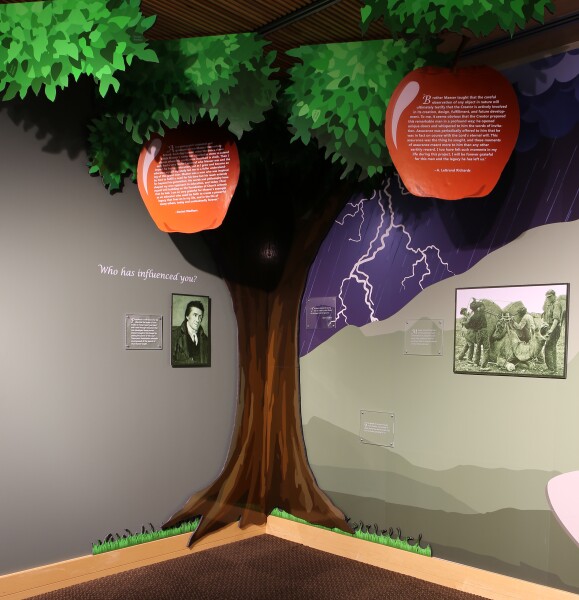 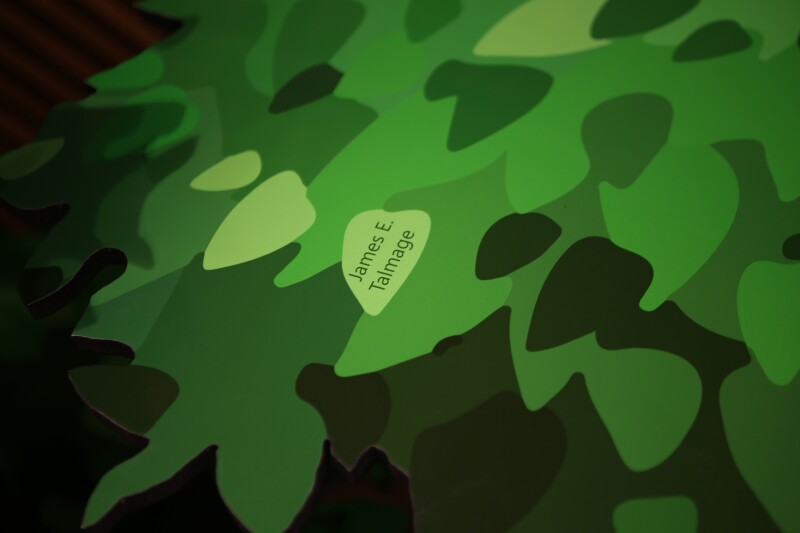 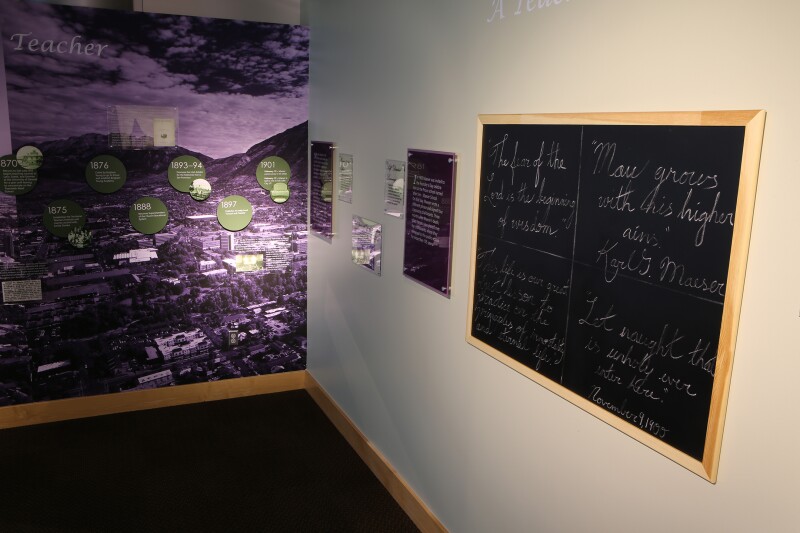 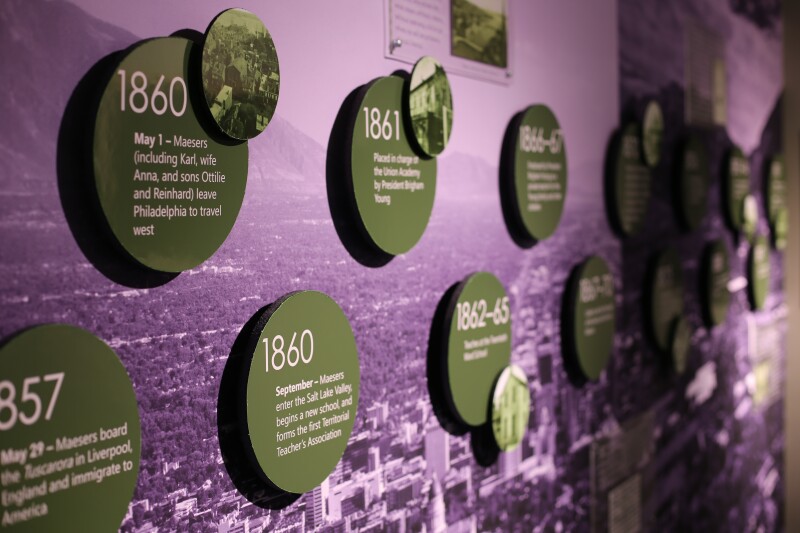 6 of 6
IMG_4754.jpg
Roger Layton/BYU Photo
1 of 6
Download this Gallery By clicking this link you agree to our Terms & Conditions
Media Contact: Emily Hellewell
Related Articles
data-content-type="article"