A mouth-watering steak may look well done, but its brown color on the outside does not necessarily mean it’s been thoroughly cooked.

BYU undergrads Maria Carter and Amanda Nordquist have been experimenting with different meat tenderizing techniques to find out if some methods affect the color meat turns at low heat.

Carter and Nordquist use three giant machines to tenderize steaks: one that stabs the meat with metal blades, another that punctures the meat with hollow needles and injects a brine solution and a third that shoots high-pressure brine directly into the meat.

They cook a steak from each of the tenderized groups at each of the official USDA temperatures for rare, medium rare and well done. And the best part? To provide meaningful findings, the project calls for a sample size of 120 steaks.

The results thus far indicate a noticeable difference in color between steaks that have been tenderized mechanically and control steaks. Mechanically tenderized steaks may turn brown at much lower temperatures, giving steaks a cooked appearance when they are still undercooked.

The good news is that commercially tenderized steaks are generally not found in grocery stores or sold directly to consumers where they could be undercooked. These steaks are typically only found in restaurants that are required by law to cook by internal temperature, not by appearance. You’re probably safe as long as restaurants follow food safety laws.

Carter and Nordquist have been invited to present their findings at the annual meetings of the Institute of Food Technologists in June. 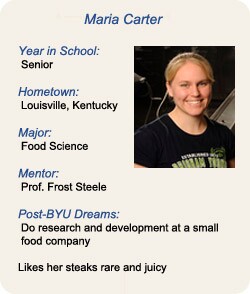 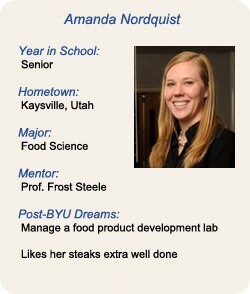 2 of 2
Amanda.jpg
Kenny Crookston/BYU Photo
1 of 2
Download this Gallery By clicking this link you agree to our Terms & Conditions
Media Contact: Joe Hadfield
Related Articles
data-content-type="article"