The Sandhurst Competition is a two-day team competition that tests the physical fitness, military skills, leadership and teamwork for military squads from around the world. The highest overall ranking achieved by any ROTC team was 4th place, a record set by BYU four years ago.

BYU’s 2013 team consisted of freshman through senior cadets, none of whom had previously competed at Sandhurst.

Team captain Dan Cox from Texas was responsible for the semester-long training schedule that helped prepare the team for the competition. Participating teams were given a general idea without any specifics of what to expect at the competition, so preparation was difficult.

“It was one of the most important growing experiences I've had in my ROTC career,” Cox said. “Lining the entire semester's worth of training, adjusting as needed, working with people with different personalities and putting them all together in a cohesive unit was a really unique experience.”

The experience of leading and working together worked well for the team as they learned to appreciate each other’s skills, share their expertise and focus on their goals.

Capt. Ian Berg was the instructor in charge of the Sandhurst team. Berg said that he largely left the preparation in the hands of the cadets, which is a unique teaching style in ROTC programs.

“We put an exceptional amount of responsibility on the cadets for planning and leading from the beginning of the semester all the way on through,” Berg said. “It's their team, it's not our team. We're not the ones that are competing.”

Cox said the team is happy with their achievement, but views this year as a learning experience which will help them prepare for next year. The team pushes themselves to excel and Cox is confident they can win. That drive to excel is not for personal gain, but part of their sense of duty as future officers in the military.

“We're not people who like to just do stuff for what we get out of it,” Cox said. “We push ourselves to our limit because that's how we get better and we want to be the best we can.”

The Sandhurst competition started in 1967 when the Royal Military Academy Sandhurst in England presented West Point with an officer’s sword, intended to be a prize for a competition among the cadets. Over the years the competition has grown and is now an invitation-only competition which includes teams from across the globe. This year 58 teams competed, which included 10 international teams and eight ROTC teams. 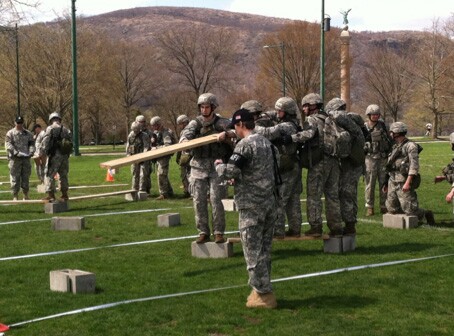 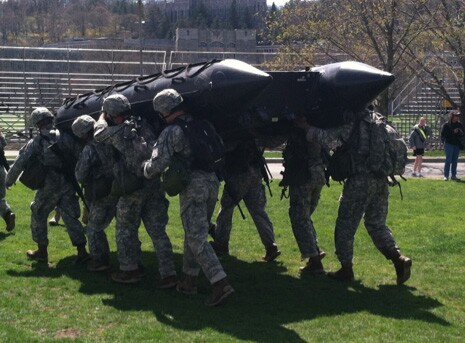 2 of 2
rotc 1.jpg
Jonathan Hardy/BYU Photo
1 of 2
Download this Gallery By clicking this link you agree to our Terms & Conditions
Related Articles
data-content-type="article"