It’s been a little over a month since a devastating 7.1-magnitude earthquake killed 370 people and injured roughly 6,000 more in Mexico. And while rescue efforts have ceased, rebuilding efforts may last for years.

Part of the reason reconstruction efforts have slowed is because many of the severely damaged buildings continue to settle and shift. BYU civil engineering professor Kevin Franke has seen the damage in person, recently leading an NSF-funded reconnaissance mission in Mexico City to help provide engineering answers to recovery challenges.

Franke and select colleagues from the Geotechnical Extreme Events Reconnaissance Association (GEER) used unmanned aerial vehicles (or drones) to map out the devastation, measure the impact to infrastructure and help provide insight for why more than 40 buildings collapsed during the quake.

“Mexico City is built on an ancient lake bed of clay soil and it is settling rapidly, sinking about 10 centimeters each year,” Franke said. “These soft soils also tend to amplify earthquake ground motions, making the destruction from this earthquake worse.”

As with previous trips (Franke went to central Italy after a 6.2-magnitude earthquake leveled mountain villages last fall), Franke will use the data obtained from the drones to create 3D computer models of the aftermath. Using a methodology called “structure from motion,” computer vision, the models will be used to further study the damage and learn why certain buildings were impacted more by the earthquake than others.

Since 2012, Franke has now been involved in six of these post-earthquake geotechnical engineering reconnaissance missions with GEER. He and his students are now working on a journal paper to summarize significant observations and findings from his latest trip.

“Improved engineering can help save lives during an earthquake,” Franke said. “That’s our ultimate goal. If we can improve engineering codes and standards by increasing awareness of the hazards posed by earthquakes like this, then our efforts are a success.” 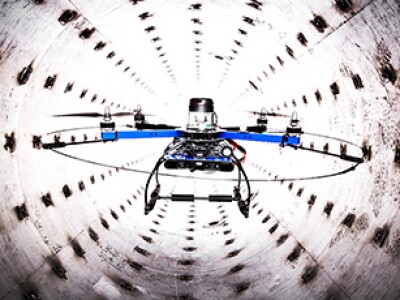